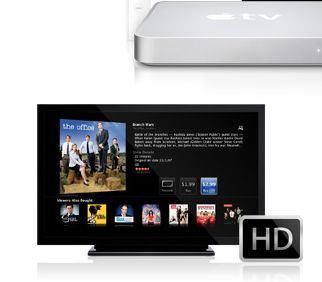 Let me say right off the bat: I hate cable television. I hate most of the content, I hate the presentation (from the crap cable boxes) and I especially hate the cost. I cancelled all but the very basic cable a few weeks back and I haven’t missed it — except for television in high definition (HD).

But Apple appeared to solve that problem several weeks ago when it added HD shows in addition to bringing back content from NBC. The only thing stopping me from getting an Apple TV was that I hadn’t had time to go to the Apple store. Today, Apple is charging ahead with even more shows in HD, including programming from ABC, CBS, Fox and more NBC shows. So I should be absolutely thrilled right?

While exploring the iTunes store following the announcement. I started looking at the prices. While $2.99 for an HD show seems reasonable when a standard show is $1.99, selling a season pass for most of these shows for between $50 and $60 is ridiculous. Yes, I know $3 times twenty or so shows in a season is $60, but there definitely should be a substantial discount if you buy the pass.

I thought cable with HD was bad when it cost me about $110 a month — season passes for just two shows in HD on iTunes would cost me more! And I wouldn’t even get all the other crap that comes with cable like Spike TV. Which again, to be clear, I don’t want, but would give me much more for my money.

Yes, I know, shows on iTunes don’t have commercials. But that’s why God invented the digital video recorder (DVR).

And yes, bought through iTunes, I would own them. But do I really want to own most of them? No. 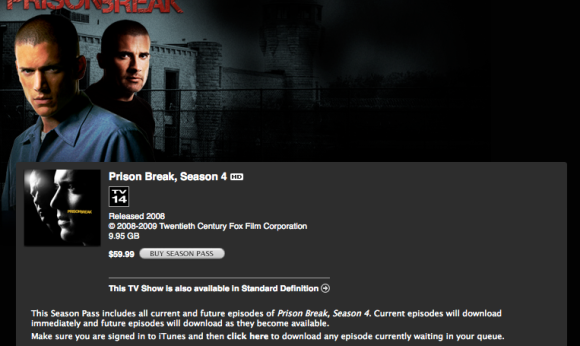 Shows in HD on iTunes aren’t even top-notch HD (and some would argue they’re not HD at all). Just look at one compared to a Blu-ray disc. There’s no contest which is better.

In fact, I’m not even sure I can see that HD iTunes content is any better than DVD-quality. So why are DVDs of these shows significantly cheaper than buying even the standard definition versions on iTunes? After all, with no packaging costs, you’d think iTunes could serve them up cheaper.

I’m guessing it isn’t really iTunes’ fault, I’m sure once again Hollywood is pushing for these exorbitant costs. After all, iTunes has been fighting the music industry for years to keep costs of music low, and I can’t see why their desire would be different with television. For them it’s not a huge money maker, just a way to drive hardware (in this case iPods and Apple TVs) sales.

So Hollywood can push away and keep the prices that high. I didn’t need too much of a nudge to find a site with torrents.