So much for the denials after the latest “ads on Twitter” debate, which seems to flare up every few weeks. Ads are here — if you happen to live in Japan.

Twitter felt compelled to launch a Japanese-specific version of the site tonight after seeing a large percentage of Japanese users on the United States-based service. If you are in Japan, you can find the site at http://twitter.jp — otherwise that link will forward you to the English version.

The real story here is that Twitter Japan will feature advertising right from the get-go, CNET learned while talking with Joi Ito of Digital Garage (which Twitter used for some Japanese localization), who is the chief executive of Creative Commons and a VC. “Ads are important,” Ito said. “It’s always harder to add ads later. So we’re launching with them in Japan.”

Toyota will be one of the first official Twitter advertisers. It will be featured in ads that run on the site as well as set up its own Twitter feed, which will presumably advertise its product too. (Though I would like to know a car’s mundane thoughts from time to time.)

So ads are now on Twitter in Japan, can they really be far behind in the United States? Frankly, just as long as the site is working again after being useless most of the past four days, I’m happy.

update: Joi Ito has a screenshot of Twitter Japan complete with a Toyota ad. It doesn’t look all that bad (see below). 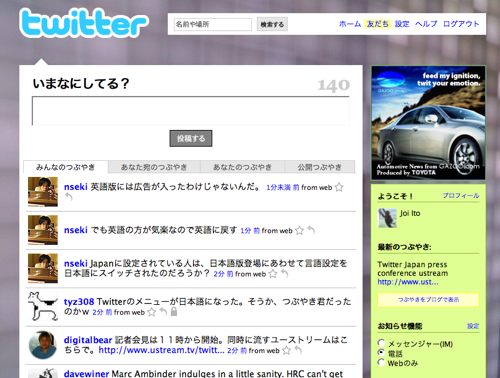