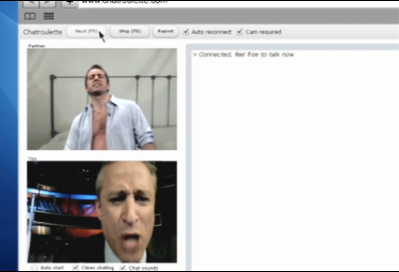 The firm said the site’s traffic has risen 50 percent in the last five weeks, even as naysayers have criticized the service for the rather explicit leanings of its users.

ChatRoulette is a service that exploded earlier this spring after Russian teenager Andrey Ternovskiy launched it as a way for strangers around the world to randomly connect with each other through video chat. It was an overnight success to say the least, and helped fulfill Ternovskiy’s dream of coming to the U.S.

You could click from interacting face-to-face with a real group of students at a Chinese Internet cafe to a couple of Chilean guys to people dancing to techno in Europe. It was an odd throwback to the days when you could lurk anonymously in AOL chat rooms and talk to strangers.

But, as we said almost two months ago, the nascent site would have to overcome the tendency of a certain fraction of its users to expose themselves. A random sampling of ChatRoulette users by RJMetrics found that about one-eighth of people on the site used it in an “adult” way.

The company has gone to work on the problem. It’s experimented with computer vision technology to identify inappropriate body parts and is testing better ways of kicking off people who repeatedly use the service explicitly.

Investors have remained divided over the project’s potential as a business. Union Square Ventures’ Fred Wilson held off, saying that Ternovskiy didn’t seem like he knew what to do with ChatRoulette. But the teenager’s mentor and SGN founder Shervin Pishevar has said in the past that there’s a deeper philosophy underlying Ternovskiy’s thinking. How do you harness randomness to improve people’s lives?

More than ever, the Internet and social networking are compressing the distance between people. The person you end up marrying, the places you go, the job you find and the school you attend are largely determined by the people you know. Several generations ago, those people were likely confined to a specific place or were part of your family.

Today, there’s a much greater chance that a friend on the other side of the world might refer you to a new idea or place. Or you might have very random friendships forged in online chat rooms or through meetups. If Ternovskiy can tap into these ideas and think more broadly about random interaction beyond completely random video chat, perhaps there’s hope yet for ChatRoulette.