Some new social networking stats are in from respected analytics firm Hitwise, and as with any limited data set, there are all sorts of interesting possibilities one could draw.

For example, Is Facebook’s redesign slowing its growth? The firm is reporting that Facebook’s pageviews have grown 50 percent year-over-year from August of 2007 to August 2008, in terms of overall social networking market share in the U.S. But Facebook only grew slightly from July to August of this year.

The main chunk of the past year in question was when Facebook’s platform saw surges in growth from third-party applications — possibly accounting for pageviews to the site? But Facebook started rolling out its redesign in July, and I’ve been hearing rumors that pageviews have since dropped because the redesign de-emphasizes clicking around within various parts of user profile pages (such as on applications). Then again, Facebook doesn’t focus on pageviews as an important metric.

Meanwhile, MySpace’s pageviews have dropped ten percent — hey, it also went through a redesign this past year — but it has other good news. Its users spend more than 30 minutes on it, far more than rivals. MySpace also gets the most organic search terms, a data point that Google uses to offer Insights, a service correlates searches and popularity in visual maps. Insights has already shown that MySpace as the most searched-for social network in the U.S.

MySpace’s size also domination continues. Out of the 56 largest U.S. social networking web sites, MySpace.com got 67.54 percent of U.S. visits in August Facebook, got a mere 20.56 percent of total visits. And oh yeah, the whole sector saw a 17 percent drop (I wonder about this stat, and if Hitwise may have made a methodology change that would account for it?) 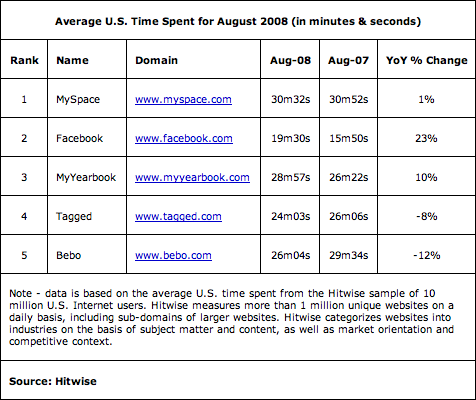 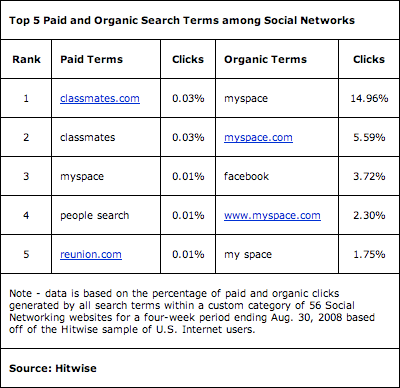