Immigrating to a new country is not easy. Culture shock is all too common for the hundreds of millions who leave their birthplace each year in search of better opportunities, as unfamiliar customs, architecture, and dialects become the rule rather than the exception. It’s this dynamic that draws recently installed residents to ethnic enclaves in cities like New York, Houston, Los Angeles, and San Francisco, where local communities serve as links to far-flung places of origin.

There’s been no true online corollary, however, save loosely affiliated groups on Reddit, WhatsApp, Facebook, and other social media platforms. That’s why Ran Harnevo, former president of video for media company Oath, and Hanan Laschover, former CEO of AOL Israel, in 2017 teamed up to launch Homeis, which the pair describe as a “culture network” for foreign-born nationals and expats. Following a $4 million seed round, the New York- and Israel-based startup raised $12 million in series A funding led by Canaan and Spark Capital, bringing its total raised to about $16 million.

Harnevo, who serves as CEO, said the fresh capital will enable Homeis to expand its service to the roughly 250 million immigrants around the world, starting with Mexican and other Latinx communities in the U.S. Homeis currently serves “hundreds of thousands” of Indian, Israeli, French, and other communities domestically. 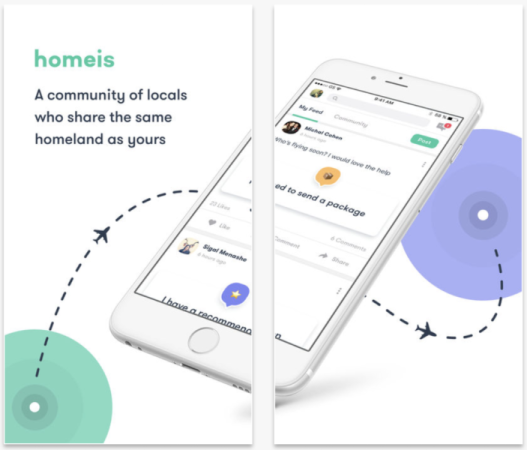 “Empowering immigrants is a personal mission, one which we believe is timely and important,” added Harnevo, who previously cofounded 5min, a syndication platform for lifestyle and instructional videos that was acquired by AOL for $65 million.

Homeis’ eponymous app for Android and iOS encourages users to share experiences with (and contribute knowledge to) their communities. Users start by answering two questions at first login: the country they’re originally from and the city they live in. From that point forward, they’re afforded access to vetted and community-created social and utility resources that help them network; organize meetings; arrange appointments with doctors, lawyers, and other professionals; and foster connections with independently run businesses and restaurants.

Homeis curates guides to various aspects of expat life, like opening bank accounts, filling out visa applications, and filing taxes for the first time. And the app hosts a marketplace where community members can pick up items they’re looking for or sell belongings they wish to get rid of. Separately, Homeis users can also create events or groups to connect with others over shared hobbies and interests, and they’re able to filter feeds and recommendations so those that interest them bubble to the top.

“We are thrilled to have the support of our investors and are committed to supporting immigrants wherever they are, making technology work for them and fulfilling their very special needs,” said Harnevo.