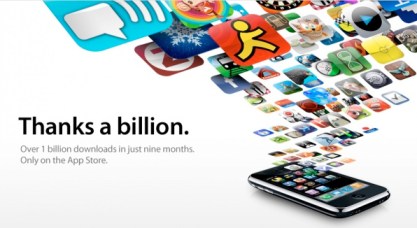 Apple announced today that the AppStore has hit 1.5 billion downloads in the past year. There are now more than 65,000 apps available in 77 countries for the 40 million owners of iPhone and iPod Touch devices.

More than 100,000 developers are now working on apps for Apple’s devices. Apple is honoring the occasion with its usual swagger.

“The App Store is like nothing the industry has ever seen before in both scale and quality,” said Steve Jobs, Apple chief executive, in a statement. “With 1.5 billion apps downloaded, it is going to be very hard for others to catch up.”

Of course, we have to agree that Apple is leading the charge in the digital media revolution on portable devices and cell phones, shaking up an industry that had become accustomed to giving consumers a tiny amount of choice. Nokia, Palm, BlackBerry and others are all scrambling to catch up. But it’s very early in the revolution.