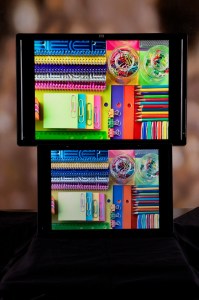 Most high-quality computer displays have about 16.7 million colors. But that’s not good enough for the color experts at places such as animation studios. For artists who have to compare work across long distances, getting the colors exactly right is both difficult and critical.

Hewlett-Packard is introducing a billion-color display today for those artists. That’s 64 times the number of colors you normally see.

The stunning DreamColor LP2840xz display is a result of collaboration with HP’s longtime partner-customer, DreamWorks Animation, the maker of animated films such as “Shrek the Third.” DreamWorks CEO Jeffrey Katzenberg approached HP about a year ago to find a solution to the problem his artists were having, particularly when they tried to compare color schemes across global locations.

Those artists lost a great deal of color accuracy when they moved from cathode ray tubes to liquid crystal displays. They could also use high-end studio monitors that cost $25,000 from the likes of Sony. But the HP display, with a 24-inch screen, will cost only $3,500 or so. Users can set the display so that it shows precise color schemes such as the Adobe RGB color gamut. Alongside a normal LCD display, the billion-color display looked excellent. John Cook, vice president of marketing at HP’s Personal Systems Group, says that some of the technology came from HP’s printing group, thanks to its expertise in color science.

Ed Leonard, chief technology officer of DreamWorks Animation, said the display is a filmmakers dream. The display includes the DreamColor Engine software and a color calibration kit for making precise color settings. HP introduced the first printers that can print images from the display in March.

It remains to be seen if this type of screen will please either ordinary computer users or color technology experts, who are notoriously finicky. Devo Frohne, a motion graphics designer at Astro Gaming in San Francisco, said that CRTs are hard to synchronize as well and he thought a billion colors would be impressive. At the same time, he wasn’t sure if he truly needed it, except to determine color gradients, or shades.

It’s worth noting that TV sets such as a new LCD model from Panasonic have the ability to display 68 billion colors. But monitors typically don’t come with such color schemes because of the cost of including the software, memory, and processing power.

Jon Peddie, an analyst at Jon Peddie Research who has followed the graphics business for decades, says that this display is the real deal.

Peddie said that HP’s inclusion of a variety of preset color formats is a smart way to get the experts to adopt this display. With a touch of a button, artists can access formats including sRGB, Adobe RGB, Rec. 601, Rec. 709, DCI-P3 emulation (97%), and full gamut.  The native resolution is 1920 x 1200 pixels.

“The DreamColor solves a problem that people have been working on for five years,” Peddie said after he saw the display. “HP made a breakthrough and basically broke the sound barrier – At the amazingly low price they are selling it for, I predict they will not be able to make them fast enough.”