Hulu, the online streaming video site backed by NBC and Fox, has been nothing short of successful. The usage numbers are very good and the amount of free, ad-supported content is arguably better. If there is a knock that can be made against it though (besides its lack of availability outside the United States), it’s in the department of high definition content.

Though Hulu launched its “HD Gallery” back in December, it basically only contained movie trailers. It was more of a proof-of-concept then a feature. Today, the site rolled out some actual content in HD including popular shows like The Office, 30 Rock, Heroes and 24. Unfortunately, each of these shows only has one episode a piece in HD.

ABC.com by comparison offers entire seasons of some of its shows in HD. However, its player requires a seperate download while Hulu does not (assuming you have the latest version of Flash). ABC is planning to launch a revamped player in time for this fall.

Hulu does off all of Dr. Horrible’s Sing-Along Blog, the hit web-only show created by Joss Whedon in HD.

Perhaps even better is that none of the shows in HD currently have advertisements attached to them. This seems a bit odd given that this is how Hulu is able to stream its shows for free, but apparently this will only be the case “for a limited time,” a Hulu PR representative told NewTeeVee. 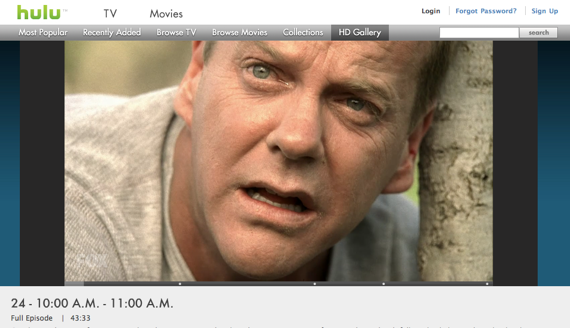 While some may argue that this isn’t true HD video (it’s 720p video likely at a relatively low bit-rate), I just watched the episode of 24 full-screen on my 20-inch monitor and I have to say, it looked absolutely great. As someone who watched all of season 2 of Heroes on Hulu in standard definition, I can definitely say this is a huge improvement.

It’s so good in fact, that when Hulu adds more content in HD I may just have to go out and buy a Mac Mini to hook up to my HD television to play it on there. Assuming one of the many set top boxes doesn’t gain Hulu support first.