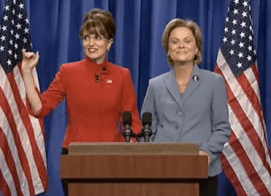 Professional video site Hulu saw its traffic plummet after Election Day — a drop as high as 10.8 percent, according to earlier comScore reports. Even though statistics classes emphasize that correlation doesn’t equal causation, it seemed that viewers, who flocked to the web site in droves to watch Saturday Night Live’s hilarious Sarah Palin-skewering skits, lost interest after Tina Fey retired her gun-slinging, caribou-hunting impersonation and Barack Obama t-shirts became even more scarce. Now it turns out the decline in traffic was not so steep.

It looks like comScore was just reporting traffic to Hulu.com, and not including traffic from embedded videos or distribution partners like MySpace, in its earlier reports. The latest comScore video metrix report, which includes distribution partners, shows only a 6.4 percent decrease in unique viewers from October to November, which is still 179 percent higher than September, says Silicon Alley Insider. Viewers actually spent more time watching videos, according to the chart below — phew. Saturday Night Live clips continue to be the most popular on the site in December (thank Andy Samberg), although Hulu’s recent addition of movies like Gattaca may also be contributing to the increase in minutes per video watched.

I agree with MediaMemo’s Peter Kafka that Saturday Night Live skits like “Obama Plays it Cool” just don’t have the same eye-winking charm of Fey’s parody. But the show might just have enough material for Granny Sarah jokes now that Bristol Palin has given birth to Tripp Easton Mitchell Johnston (I was hoping for “Train” or “Trapeze”) — an ironic name choice given the baby’s paternal grandmother has been arrested for peddling drugs after text messaging police informants.