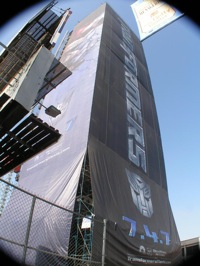 Google-owned video site YouTube is experimenting with another way to make some extra cash — placing a giant banner ad on its homepage, according to Silicon Alley Insider.

People love to speculate and complain about YouTube’s struggle to make money from its huge audience. Yesterday, Google revealed that when YouTube notifies content owners that their copyrighted material been found on the site, most owners choose to monetize those videos, rather than demanding they be taken down. Right now, no one’s making a ton of money from those deals, but this could become a growing piece of YouTube’s revenue over time.

Banner advertising on the YouTube homepage, on the other hand, could bring in money pretty quickly. If SAI’s sources are correct, Google will add a banner that’s as tall as the main video ad currently on the page and spans the entire width of the homepage. The first banner ad could come as soon as two weeks from now.

So how much money might Google make by giving up more homepage real estate to advertisers? The company will start by offering the new ad space for the same price as the existing ad unit — $200,000 per day. Rates will presumably see a sharp increase soon after.

Google isn’t commenting on the story, but this seems like a smart, relatively easy way to bring in more money. Sure, the rumored ad sounds huge, but it will be less out-of-place on a media site like YouTube than, say, on the homepage of Google proper.

[Photo from Engineering a New World]