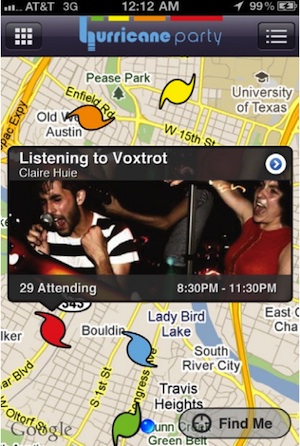 If you’re trying to coordinate a get-together at the South by Southwest conference in Austin next week (or anywhere else), there’s no shortage of apps that want to help. One of the newest options is a startup called HurricaneParty, and it’s not afraid to have a little fun at its competitors’ expense.

Now, most of the apps I’ve seen that are launching or announcing big updates in advance of SXSW are either group chat apps (like Yobongo and GroupMe) or location-based apps (like Gowalla). But despite the varying features, all of these apps share at least one big goal — helping you meet up with friends.

Here’s one example of how I might use HurricaneParty. It’s getting late in the day at SXSW, but I don’t want to fight my way into any of the official parties, which will be totally packed. Instead, I just want to get together with some friends and acquaintances at a bar. Existing event tools like Facebook Events aren’t really built for such off-the-cuff gatherings. Instead, I might send text messages to people I know, or I can try a group texting app like GroupMe. That can quickly become a hassle if I start getting a million replies, and it limits the invite list to people in my phone’s address book.

HurricaneParty, on the other hand, makes it easy to create an event and set the level of privacy that you want. So you can make it open to anyone, or just to your friends, or just to the specific people you’ve invited. People get the invite on their phone (either via push notification from the HurricaneParty app or SMS text message), and you can also promote the event on Facebook or Twitter.

The app also offers a nice interface for finding parties that are going on right now — which is, after all, when I make most of my party-going decisions. Parties are displayed in both list and maps formats and are categorized by how hot they seem to be. That’s based on how many people said they’re attending, how many people actually checked in at the event, how many people posted comments and photos, and so on.

Austin-based HurricaneParty was incubated by Capital Factory and has raised an angel round of $95,000.

And like I said, the company isn’t afraid to make fun of the competition. HurricaneParty has created a parody of Yobongo’s launch video, which you can view below. It’s incredibly insider-y — in order to get the joke, you need to know what Yobongo is (and the company only launched last week) as well as be familiar with Yobongo’s video. Still, this kind of insider sniping may be exactly what the startup-centric SXSW audience is looking for. (I’ve also included the HurricaneParty demo video, which is perhaps a bit more useful.)