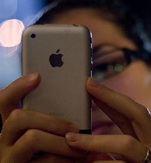 84.8 percent of iPhone owners use the device to browse the web, according to a new study by M:Metrics. That’s a staggering number when you compare it to the rest of the market: Only 13.1 percent of people who own other types of cellphones are using their phones for the same purpose. Even on other smartphones, only 58.2 percent use their phones to browse the web.

These numbers suggest that Apple chief executive Steve Jobs was right when he said the iPhone would change the way people use mobile devices to browse the Internet. At the All Things D conference in May of last year (just prior to the iPhone launch) Jobs said, “You’ve used the internet on your phone, it’s terrible! You get the baby Internet, or the mobile Internet — people want the real Internet on their phone. We are going to deliver that.”

It’s interesting to note that the “real” Internet that Jobs talked about has changed somewhat as a result of the iPhone. A number of sites, including Facebook, have made pages specifically built for the device. Things could change even more when the third-party applications developed with the iPhone’s SDK (software development kit) begin to come out in June (our coverage).

The other numbers from the study (in the table below) are just as impressive for the iPhone — especially the use of social networks on the device and naturally, the use of the device for music playback.

“Apple really made a device that is Internet-centric and really fits the kind of digital lifestyle that a lot of people who are jacked into the Internet all the time are used to,” Mark Donovan, an analyst at M:Metrics told The New York Times Bits blog.

Apple’s computer sales division saw some very encouraging numbers as well recently. A report from NPD says that in February Mac sales were up 60 percent from the year prior. This data also shows Apple’s share of the PC market growing from 9 percent a year ago to 14 percent in February 2008.

Also, check out our coverage on the reports of the iPhone SDK being a “joke” and Apple getting its mojo back with the SDK announcement.

update: As our reader Sebastien notes in the comments, the iPhone is also driving mobile Google Maps usage as was previously reported by GigaOM back in September.