ESPN launched its new site design today and all I can say is “wow.” And it’s not a good “wow,” it’s a horrified “wow.” I can’t separate those advertisements from the content, and so I’ll never visit this site again.

It’s sad, because ESPN does have great content when it comes to sports. In fact, I don’t think it’s any stretch to say that it has the best content out there. But with this redesign it’s crossed a line that I expect other sites may try to cross as advertising revenues dip in the weak economy.

First of all, when you load up espn.com, you’re greeted with a huge overlay that includes not just a giant static ad, but also a video that auto-plays! It was annoying enough when ESPN had a little video in the corner that played when you loaded the site previously, but at least with that you could see other content too. Now you’re forced to sit through this overlay or click out of it. It doesn’t run every time you visit the site, but more than enough to make it so I won’t go back.

Secondly, the site itself is still just a giant ad disguised as a sports site. I’m looking at the site right now and I can’t tell if I’m at a site about sports or the website about the Ford F-150. I hope I don’t accidentally click anywhere because I must have a 50 percent chance of hitting one of these ads.

I would just visit ESPN through my RSS feed reader and avoid all this nonsense, but ESPN has chosen to go with truncated feeds — lame. And so I’ll take myself to CNNSI (which is almost as bad) and Yahoo Sports for my sporting news.

The worst part of this is that I’m actually still a subscriber to ESPN Insider. It’s mostly because I keep forgetting to cancel my $5-a-month subscription, but this just reminded me. It also gives me an idea: What if ESPN Insider subscribers got to view the site with absolutely no ads? I would gladly pay something like $5-a-month for that.

What do you say ESPN? It’s either that or lose me forever.

Update: For those who think ESPN really needs to cram as many ads as possible onto its web site, consider this: The sports cable channel makes something like $4.3 billion a year just in subscriber revenue thanks to deals with cable and satellite operators, the New York Times found out in November. (Thanks Michael.) 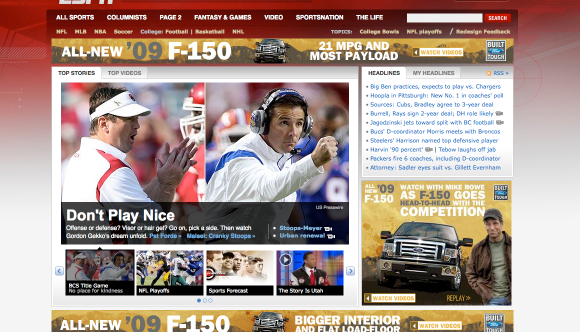