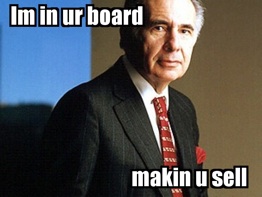 There will be no fireworks on display at the Yahoo shareholder meeting on August 1. Or at least, they won’t be as bright. Billionaire investor Carl Icahn has reached an agreement with Yahoo to drop his pursuit of a hostile takeover of the company. In return, Icahn will get a seat of his own on Yahoo’s board of directors as well as the potential for two other seats for the board replacement members he had chosen.

Yahoo and Icahn negotiated this settlement over the weekend to avoid a nasty proxy fight at the shareholder meeting that would have seen Icahn try to replace Yahoo’s entire board of directors — including chief executive Jerry Yang — with people of his own choosing. Icahn owns over 68 million shares of Yahoo stock, right around 5 percent of the company.

Here are the key quotes from the press release:

“We are gratified to have reached this agreement, which serves the best interests of all Yahoo! stockholders,” said Yahoo! Chairman Roy Bostock. “We look forward to working productively with Carl and the new members of the Board on continuing to improve the Company’s performance and enhancing stockholder value. Yahoo! is a world-class company with an extremely bright future, and collaborating together, I believe we can help the Company achieve its ambitious goals.”

“This agreement will not only allow Yahoo! to put the distraction of the proxy contest behind us, it will allow the Company to continue pursuing its strategy of being the starting point for Internet users and a must buy for advertisers,” said Yahoo! Co-founder and Chief Executive Officer Jerry Yang. “No other company in the Internet space has our unique combination of global brand, talented employees, innovative technologies and exceptional assets, attributes that will help us take advantage of the large and growing opportunity ahead of us. I look forward to working together with our new colleagues on the Board to make that happen.”

Mr. Icahn said, “I am very pleased that this settlement will allow me to work in partnership with Yahoo!’s Board and management team to help the Company achieve its full potential. While I continue to believe that the sale of the whole Company or the sale of its Search business in the right transaction must be given full consideration, I share the view that Yahoo!’s valuable collection of assets positions it well to continue expanding its online leadership and enhancing returns to stockholders. I believe this is a good outcome and that we will have a strong working relationship going forward. Additionally, I am happy that the board has agreed in the settlement agreement that any meaningful transaction, including the strategy in dealing with that transaction, will be fully discussed with the entire board before any final decision is made.”

As you can see, Icahn is still all about a transaction. So while there may be peace for now, don’t expect this saga to be truly over until Yahoo sells either its search business or the entire company. The leading contender in both regards remains, of course, Microsoft.

Yahoo shares are down 3 percent today on news of the Icahn/Yahoo truce.

To make room for Icahn and the two new board members, Yahoo will expand its board from 9 members to 11. All of the current board members will stand for re-election (with Icahn’s backing) except Robert Kotick, who is stepping down. Kotick is the chief executive of the newly merged Activision Blizzard gaming company.