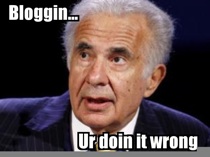 Billionaire investor Carl Icahn is really turning into a blogger.

A lot of bloggers when they go a few days without writing chime in to give an excuse for the lack of updates. I do it on my personal blog too. And today we got such a post from Carl Icahn.

Of course, Icahn’s excuse is a bit more sexy than your typical “I’m busy” or “I’m moving” post. Icahn really only wants to write about one thing: Yahoo’s absurdness. However, he cannot write on it due to SEC regulations. He is, after all, attempting to launch a hostile takeover the company.

“Many of you have been asking me about Yahoo. Please remember I am in the middle of a proxy fight. A proxy fight involves a complicated process of SEC approvals, federal securities laws, filing requirements and a great deal of time and money.”

Fine. We’ll let you slide this time Carl. But could you at least post a YouTube video or Flickr pic from time to time or something?

Icahn does promise that he will give his views shortly however. He is expected to let his intentions for his proxy fight be known by July 4, according to CNET.