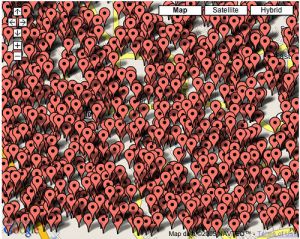 Those who are deeply disturbed about the rise in location-based applications and services and their impacts on personal privacy, can breath a small sigh of relief tonight. Google, which recently entered the space with its Latitude location network feature, has agreed to take a stand for user location privacy, according to the Electronic Frontier Foundation. It’s the second company doing location services after Loopt to adopt the policy, which the EFF summarizes as basically, “come back with a warrant.”

What’s at stake here is actually pretty big. If a company like Google knows your whereabouts at all times because of Latitude, authorities may want the right to demand that information from Google. But Google is saying it will require authorities to provide it with a wiretap order before such information is given out.

Of course, what’s not stated and is almost comical, is just how easy it’s likely to be for the government to get your location data anyway. Like it or not, a lot of users that are active on these location-based networks simply don’t feel the need to protect their location — and in many cases, doing so actually hampers the experience. So if the government really wants your location data, it can just make an account and find it for itself. In some cases it may have to friend you on the service, in some cases it may not. And a lot of people are already sending their location updates to larger networks like Twitter, which anyone can see as long as that account is public.

The good news is that neither Loopt nor Google save your previous location data when you check in at a new place. That means that, even with a warrant, authorities can’t find out where you’ve been in the past by accessing your account on those services. But it’s only a matter of time before some major location service starts tracking your past whereabouts. Hell, I kind of want that — something like a heat-map that shows where I go the most and such. Eventually, others are going to want that too.

My point is, while it’s great that Google and Loopt are saying the right things when it comes to your privacy, the current usage patterns for these networks hardly make that data secure. And it’s only going to get worse (or better, depending on your take on location-based services) going forward.