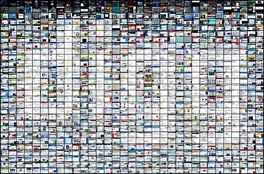 Digg, the social voting news aggregator that is perhaps the web startup most dogged by sale rumors in all of Silicon Valley, is close to selling to Google for “around $200 million,” according to TechCrunch.

Sale rumors have followed the company for years, and the company finally went out and hired dealmaking investment bank Allen & Co. to try to help sell it, last December. The price we heard then was $300 million, so maybe Digg has a depreciating shelf life? Or maybe it met the reality of the market value of news aggregators? Indeed, this is the third time that a Google purchase rumor has surfaced within this past year.

But maybe it has a lot of potential for Google. More on that, below.

First, the latest data from comScore about June social networking traffic shows that Digg has some major competitors. Most prominently, Yahoo! Buzz, which uses a slightly different method of calculating a news article’s popularity, brought in more than 9.2 million unique US visitors last month versus Digg’s 6.2 million. Digg grew 42 percent from 4.4 million the previous June — but that was before Yahoo! Buzz even launched.

Also, this past year, AOL re-launched a news aggregator site, Propeller, which it had previously launched as a Digg competitor housed at netscape.com. Today, in fact, Propeller just introduced a new look and feel that is strongly reminiscent of Yahoo! Buzz. Considering that AOL has, according to the June comScore numbers cited above, managed to grow its Community site and its AIM profiles by integrating those features with its large, existing user base, this seems like the right call.

Just as Buzz integrates top stories into its homepage — which helps promote Buzz to the Yahoo masses — so too does the new version of Propeller integrate into AOL’s homepage. 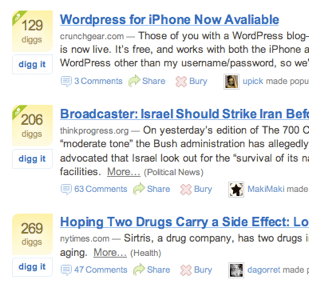 Which then begs the question: If Yahoo and AOL can build their own news aggregator properties, why can’t Google refine its own Google News site — where Digg may or may not be integrated with — or start its own Digg clone rather than buy Digg in the first place? Presumably, Yahoo! Buzz is worth more than Digg if one looks only at traffic numbers. And Propeller could very well be headed for success, as well.

However, as the TechCrunch piece notes, Digg’s voting system seems to have fascinated Google. Is Google more interested in Digg’s algorithm than its name?

Google has been quite interested in “social search” for months — broadly defined as the use of social data like you and your friends preferences, to help determine search results. It has more recently been experimenting with letting its search users vote on the quality of rankings, similar to how Digg users vote on stories. Just maybe, Digg could teach Google something about social search.

Another interesting angle to this story is that Digg currently has an advertising deal with Microsoft. If Google does buy Digg, don’t expect that to last long. After losing out of Yahoo search advertising to Google, could Microsoft really stand to lose another revenue stream to its main rival? Maybe we’ll see a counter-offer?

[MG Siegler contributed to this story.]