Today, technological advances have made it easier than ever to create music and sell it, or give it away for free. But the big problem for aspiring musicians in this new world is finding fans who will pay for things like concerts, t-shirts, CDs, digital track or anything else. Meanwhile, the problem for fans is finding new music that they’ll actually like, and maybe want to somehow pay for.

ILike is an emerging leader in this competitive but still relatively young marketplace of “music discovery” services that help musicians build fan bases. We’ve been tracking the Seattle, Wash. company for years, and at this point it appears to have become a significant component of how music will be shared in the future. Both new and existing acts are using it to help advertise album releases, and iLike is starting to have a big impact.

The company, which has gained more than 25 million total registered users, bridges two industries of questionable value — music and social networking. And get ready for this: It has a couple interesting revenue streams coming in. More on that in a second.

A key component of iLike is its social network applications on Facebook and other sites, that let you become “fans” of musicians and do things like see when a band you’re a fan of is playing nearby. Artists can also stream songs or entire albums live within their pages on social networks. A musician can send out a single update about a concert, a new track or whatever, and iLike will distribute that message across all of iLike’s properties.

Nineties’ rock band R.E.M., for example, launched a comeback album and tour last month starting with a live stream of its new album and promotional page on iLike’s app, and — and this is at least an interesting correlation — the album spent a week at number one on the two largest music sellers on the web, iTunes and Amazon’s music site earlier this month, and had sold-out concerts. 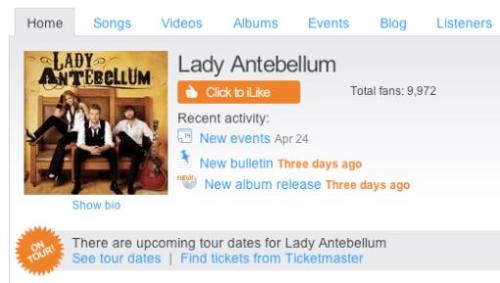 However, R.E.M. is a known act so maybe this and the quality of the music were what drove people to like it? Here’s another example of iLike at work. Earlier this month, it played an interesting part in helping an album release up-and-coming band called Lady Antebellum become the first country act to crack the iTunes top albums list, reaching number three at one point.

The album has also become a mainstream success, performing in the recent CMT country music awards ceremony, and becoming the first new act to debut at #1 in Billboard’s list of top country hits since the list itself was created in 1964. It sold more than 43,300 units in its first week of sales. And, while country hits normally only generate 4.5 percent of sales from digital music, Lady Antebellum’s latest album’s sales were more than 21 percent digital — which suggests that digital marketing of various forms, such as iLike’s applications, led people to buy digitally.

Aside: The band’s strange name comes from the house where it used to rehearse. It’s not a Gone With The Wind reference, I guess.
So where does iLike fit in?

Lady Antebellum has nearly 10,000 fans on its iLike page (see screenshot), which includes fans on its Facebook application and other social networks. It is an increasingly large component of marketing music online — where MySpace still reigns. The band was formed because its members met each other in 2006 on MySpace, and began posting tracks there — now it has 28,270 friends on its MySpace site profile (warning: If you go to that page, you’ll be assaulted by a song and a music video — with ads — all at once). Meanwhile, Lady Antebellum has only been using iLike for the last eight months, meaning that’s its popularity there has had less time to grow, and its been doing so in properties that aren’t as immediately recognized as places for musicians and their fans.

Also, Lady Antebellum had promotion efforts like interviews with radio stations and paid ads that it ran for its album. There are lots confounding variables when it comes to determining what makes music successful, besides just being good.

So here’s more on why you need to be paying attention to iLike. Its strategy is to be everywhere with an internet connection, especially everywhere besides MySpace. It began as a free-standing music community site where you could share clips of songs and see music that other people liked, part of indie band site GarageBand.com. The company has expanded to include a desktop iTunes toolbar that tracked what you listened to and recommended new music to you based on what other fans of your favorite music also liked. It launched a set of applications on Facebook when the social network began letting third parties build apps within its site, nearly a year ago. Its most popular Facebook application lets you post clips of your favorite tracks on your Facebook, profile, see when bands that you like are playing near you.

In the past half a year, it has also introduced similar applications for other social networks, built on the Open Social app development standard, including apps on Hi5, Bebo and MySpace, but its early days for all of those social network platforms. While its Facebook app has more than 13 million total users, and used daily by around 400,000 of them, the Bebo app appears to be the second largest among social networks, having been added by nearly half a million total Bebo users.

[Update: hi5 (the ‘h’ in the company name is officially lowercase) tells me its iLike app has been installed by 4.3 million of its users, far more than Bebo’s number of installs. This is pretty impressive for hi5, because the number shows that with less time and a less complete platform than Facebook’s, many third party apps can still reach millions of users on it. The caveat here is that iLike launched its app in December, as a beta tester of sorts, while the hi5 platform only officially launched late last month. Bebo also offers other options for viewing media, that may have dampened interest in its iLike application. Anyway, the metric that really matters here, that only Facebook seems to openly measure, is how many users actively use the application.]

Academic researchers have yet to prove the casual relationship between online buzz and album sales, but the evidence keeps building that it is, and iLike is showing something more. Its showing the value of giving away music for free.

R.E.M.’s album on iLike was streamed more than 1.5 million times before the album went on sale. ILike makes money from revenue-sharing agreements with Apple and Amazon, sending its users to those services. Ticket sales are another revenue stream. iLike is already one of the top sources of tickets for Ticketmaster, an investor.

Of course, there are other music discovery services, like Last.fm, Pandora and Imeem. ILike’s service requires attention by whoever’s running a band’s universal dashboard: Short, frequent updates with some regularity tend to attract the most attention, chief executive Ali Partovi tells me.

And, on that note, here’s a (rather choppy at the start) audio recording that I made of a recent call with Partovi. He talks about the success of R.E.M and other bands on iLike, and more. Check it out.