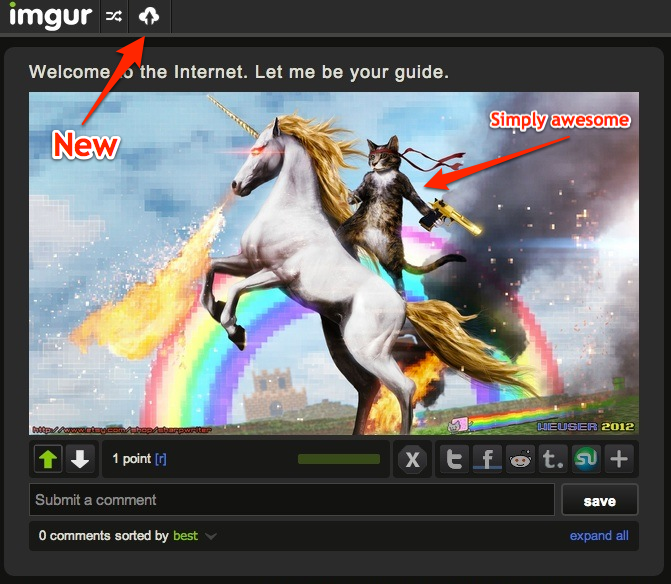 “Imgurians” may sound like a group of ancient Greek warriors, but it’s actually just the name image-sharing site Imgur’s most active users have given themselves.

Imgur is perhaps best known as the most frequently submitted URL on community link sharing site Reddit. It’s shared so often that when Imgur has a service hiccup, Reddit becomes far less entertaining. Imgur lets people quickly and easily upload image files to its site, which they can then easily share across the web. If the images are really awesome, they have a chance of popping up on Imgur’s main gallery page, which displays an automated collection of the most viral Imgur-hosted submissions from Reddit, Facebook, Twitter, StumbleUpon, etc.

But as of today, Imgurians can bypass those other social sites by submitting their potentially awesome images directly to Imgur’s gallery. Essentially, Imgur is evolving into a true social network: Its users no longer have to wait for their content to qualify as viral on Reddit before interacting with it.

“We’re doing everything that our own users have asked for, and this doesn’t take anything away from what Reddit and others are [contributing],” Imgur founder and CEO Alan Schaaf told me in an interview. “We actually have a very good relationship with the Reddit team and meet with them often.”

Reddit and Imgur have always had a symbiotic relationship, and that’s still evident in the revamped Imgur gallery — at least in theory. For instance, if people stop submitting Imgur links to Reddit, the Imgur gallery loses value. Conversely, if Imgur made it more difficult for Reddit users to submit image links, Reddit would suffer.

About 60 percent of Imgur’s traffic comes from Reddit (the biggest source), Facebook, Twitter, and other sites around the Internet, said Schaaf. The rest of the site’s traffic is from direct visits, including a growing portion of regular Imgurians. But as Imgur continues to cultivate its own community, it does open up the possibility of a conflict with Reddit in the future.

The new gallery, which is now prominently featured on the homepage, will integrate Imgurian-submitted images into the auto-generated collection of popular Imgur-hosted images from other sites. Users can vote, comment, and share all the images in the gallery. The Imgur team also added the ability to sort the gallery by the day’s hottest, newest, or most popular images. It’s very similar to how Reddit allows you to sort link submissions on its front page. 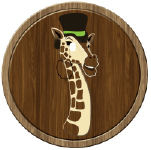 Another similarity to Reddit is the new reputation system Imgur has added. Imgurians can gain points (much like Reddit’s karma) for submitting good content and comments that other users “up vote.” There are various stages of reputation, and Imgur gives users “medallions” (much like Reddit’s Trophies and Foursquare’s badges) for achieving each of them.

For now, Imgur isn’t letting users create and moderate their own galleries based on a specific topic, which would be similar to Reddit’s subreddit pages. But if Imgur sees a large and continuous increase in user submissions, it will either need to create its own categories, or enable something like subreddits.

Nurturing its own community of users is part of Imgur’s overall business strategy. The company primarily generates revenue through advertisements on the site. And as any ad executive will tell you, one of the best ways to ensure that adverting clients stay confident about spending money is to heavily promote  that specific audience (or in this case, user base).

Imgur has already tapped that user base for revenue by offering paid subscription accounts, which offer some perks that free accounts don’t have. “Paid accounts are more of a way for people who love Imgur to support the site,” Schaaf said, adding that it’s not a major source of income.

The company is planning to release its API for commercial clients in the near future, which should provide another stream of revenue. Those clients would pay Imgur for the ability to integrate their image hosting service into their own products. For example, Stack Exchange uses Imgur’s API to handle screenshots, thus relieving the pain of having to manage a reliable image mechanism. Non-commercial uses of the API will remain free, the company told me.

While Imgur brings in over 1.2 billion image views per day, traffic rarely overwhelms its servers. Schaaf said Imgur is profitable but didn’t disclose specific financial figures. The company hasn’t raised any funding to date and doesn’t anticipate the need to do so in the future. Imgur faces direct competition from Min.us, PhotoBucket, TinyPic, and others.