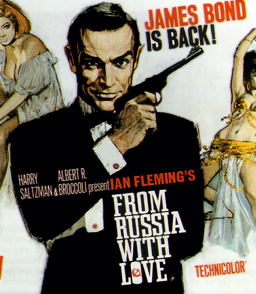 Apple is continuing its push for global expansion of the iPhone. The latest country that will be getting the device looks to be Russia. Apple has agreed to a deal with Mobile TeleSystems (MTS), according to Reuters.

Normally, an agreement between Apple and a carrier is reached then it takes a while for the country to actually get the phone. But Russia could see the iPhone as soon as October, sources say.

Much like another huge market without the iPhone, China, Russia has seen its share of unlocked phones in the country. The Reuters story claims that people often carry the device into Russia in suitcases. Some estimates claim the number of these unauthorized iPhones in Russia will be as high as 700,000 by the end of this year. I smell a sequel to the James Bond film, From Russia With Love.

The iPhone 3G is set to launch in over 20 counties, including India, tomorrow. Talks to bring the device to China, the largest mobile market in the world, are still thought to be ongoing.

[Title is a play on the old Yakov Smirnoff joke that starts “In Soviet Russia…” also known as the Russian Reversal.]