In a short Q&A town hall session, the leader of the world’s largest democracy spoke about India’s continued progress in terms of technology and internet connectivity. All the questions from the audience were hand-picked prior to the event, and none mentioned Internet.org.

After standard greetings between Facebook chief executive Mark Zuckerberg and PM Modi, the first question was how the Prime Minister views social media. Modi said that world leaders “wouldn’t gain from running away from social media” and should embrace it. “You’ll have a good government if you have many channels,” he added. 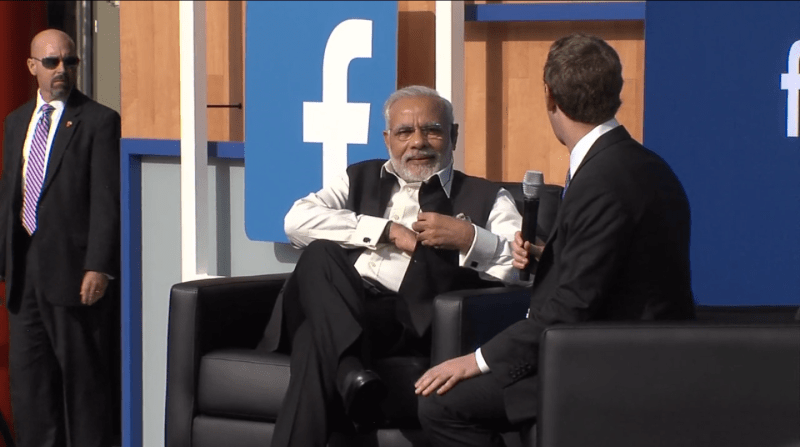 We’re living in a new world of diplomacy. PM Modi said that not only are Indian citizens more connected via social media, but that he’s active as well. He remarked, as an example, that he recently wished China’s premier a happy birthday on Weibo, and that the message quickly went viral and was considered newsworthy. “No one thought this is what diplomacy would look like,” Modi confessed.

Social media is “the new face of diplomacy,” he said, adding that if the world is indeed one big family, social media is playing a huge role in keeping it together.

He then took three questions which Zuckerberg had collected from the audience at Facebook headquarters. The first was by an entrepreneur who asked about the digital infrastructure in India, and what Modi will do to ensure that all people are connected (likely in reference to the PM’s Digital India initiative). Modi responding by saying that connectivity isn’t about choosing between physical and digital infrastructure. Instead, it’s about working on these two simultaneously. India has 250 local governments and Modi’s hope is that over the next five years, these areas will be connected through the use of fiber-optic networks.

“Civilizations originally settled along rivers, but time has changed. Cities have shifted to highways, but soon they’ll be situated along fiber optic networks,” Modi said. He revealed that he believes technology will also make governance easier and more economical.

And how would women play a part in this new economy? Modi said that he strongly believes in the power of women in society, saying that if India expects to meet its economic goals, it can’t imprison 50 percent of its population at home. There needs to be a 100 percent partnership between men and women.

He also remarked that he would be working to further education for girls, and cited his experience working on this issue when he was chief minister in the region.

Modi appeared to get emotional over the final question that Zuckerberg posed, which involved mothers. Both parents of Facebook’s CEO were in the audience, and Modi paid tribute to them. It was when he was asked about his own mother that Modi appeared visibly affected, reflecting on the incredible sacrifices she made that allowed him to rise from the owner of a tea shop in India to the leader of this populous nation.

Modi has received quite a bit of attention over his visit to Silicon Valley, perhaps a great deal of it spurred by the idea of his being a technology aficionado. Since his election to office last year, he has sought to implement his “Digital India” initiative that leverages high-speed internet access to facilitate innovation in his country. Certainly this is in line with not only Zuckerberg’s vision via Internet.org, but also Google’s.

A desire to reach out to technology companies shouldn’t be that surprising; Modi sees their services as helping to connect the world. “Social media is reducing social barriers. It connects people on the strength of human values, not identities,” he said at an event on Saturday. “I see technology as a means to empower and as a tool that bridges the distance between hope and opportunity.”

Projects for Progress. @google gives a tour to PM of four critical projects and their value for @_DigitalIndia pic.twitter.com/3AJawGBoN7

India’s prime minister arrived in California on Saturday, making him the first Indian head of state to visit the area in 33 years. He has made it a point to meet with many of the industry’s leaders, including Apple CEO Tim Cook, Tesla head Elon Musk, and others. The purpose has purportedly been to glean enough knowledge to help jumpstart innovation in his country.

Digital India is a government initiative to ensure that the public has direct access to information  — think Gov 2.0, which had previously been championed by Tim O’Reilly. The initiative also seeks to extend access to high-speed internet networks throughout India, including in rural areas. Modi has set a goal to have all of this completed by 2019.

Modi has touted his government’s success in the past year, much of which he attributes to technology. Thanks to U.S. technology, he said, the country has made strides in the fight against poverty by utilizing networking and mobile devices to empower people. These efforts have resulted in the creation of 180 million new bank accounts, as well as insurance for the poor, and establishment of retirement pensions. Modi added that 170 applications have been identified to help India’s government function better; and more.

Today’s special Facebook town hall isn’t the only newsworthy event from Modi’s visit to the technology capital. At a private dinner on Saturday, executives from some of the biggest companies in the region announced their support for the world’s third-largest economy (based on purchasing-power parity).

Among those that reportedly made announcements was Qualcomm’s executive chairman Paul Jacobs, who committed $150 million to startups in India and said the company would establish a design innovation lab there.

Satya Nadella was said to have shared that Microsoft would begin offering cloud services from Indian servers.

Google will also be making investments in India: The company aims to provide Wi-Fi access in 500 rail stations and plans to offer Android keyboards available in 10 Indian languages, beginning next month.

Not accepted by all

Modi’s arrival in Silicon Valley has been welcomed by many, but not all. Academics have penned a letter raising concerns about the visit, saying that they believe the Digital India initiative raises questions about safeguards for privacy of information. Namely, signatories of an open letter say it “seems to ignore key questions raised in India by critics concerned about the collection of personal information and the near certainty that such digital systems will be used to enhance surveillance and repress the constitutionally protected rights of citizens.”

Others have raised issues around Facebook’s Internet.org initiative, concerned that it won’t abide by principles of net neutrality.

In response, Facebook’s vice president for Internet.org, Chris Daniels, told The Economic Times earlier this week: “The net neutrality debate in India and particularly the criticism around Internet.org was really a small group of connected individuals who were spreading fears about what the programme could do to the Internet.”

Others have protested against Modi over his role in the 2002 religious riots in the Indian state of Gujarat when he was the chief minister of the state. In fact, as people drove up to Facebook’s headquarters, there were protestors lined up outside.

Of note, this is Zuckerberg’s latest in a string of meetings with world leaders, as he spent time last week with China’s President Xi Jinping, and addressed dignitaries at the United Nations on Saturday. The meeting with Modi is also the second town hall event that Zuckerberg has hosted, the first with President Barack Obama in 2011.