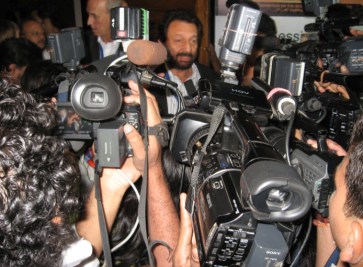 MUMBAI, India –- As the global economy limps along, media and entertainment gliterrati jetted to Mumbai this week (Feb. 17-19) to celebrate India’s entrepreneurial spirit, the new era of multimedia and the worldwide growth of Indian industries.

It begs the question: Is the country be recession-proof? At the very least, the event showed how the global slump is viewed through a different prism in India’s emerging economy. Executives, policymakers and entertainers descended on the city’s ritzy Renaissance Hotel for the three-day schmoozefest hosted by FICCI, the Federation of India Chambers of Commerce and Industry. Such lavish events are few and far between these days in the U.S. and Europe.

But India hasn’t escaped the financial crisis unscathed, despite the upbeat attitude of industry leaders. In fact, the second-fastest growing economy in the world after China is clearly slowing. Its financial markets are suffering, and many of its major companies have hunkered down for a long economic winter, shifting major projects to the back burner. In particular, its weaker media companies and startups are failing in much the same way as those that went bust after the U.S. dot-com boom eight years ago.

Even so, media executives at the event have been extraordinarily optimistic, spreading the word that India boasts world-class entrepreneurial, management and artistic talent. They appear confident that the Indian middle class market and millions of youthful entertainment consumers aren’t going anywhere. Not only that, but movie-goers, TV-watchers and internet consumers on an international level are more interested in India’s culture and untold stories than ever before. Needless to say, Slumdog Millionaire is leading this charge, with Bollywood films and other media hot on its heels.

Monica Tata, vice president of entertainment at Turner International India, says the media and entertainment industry will weather the recession. In a market larger than the U.S., India cranked out 1,000 movies last year and sold 3.7 billion tickets. “Whatever be the mood in the country, everybody wants entertainment,” she says.

“We have investors continuing to flock to this market because we’re one of the few markets still innovating and growing,” says Kunal Desgupta, chief executive of Sony Entertainment in India.

Over the next five years, the country’s media and entertainment sector is projected to grow at a 12.5 percent clip to $21 billion (up from $12 billion), according to a KPMG report on the industry conducted for FICCI. India will also remain the world’s No. 2 fastest-growing economy, trailing only China over the next two years, reports the International Monetary Fund.

A U.S. delegation, part of the U.S.-India Business Council and led by Intel executive Donald Whiteside, has come to Mumbai in what executives have termed a new spirit of economic cooperation with India. “2008 has been a banner year for collaboration between the two countries,” Whiteside says.

The council, which represents 300 U.S. and Indian companies, is pushing for more free trade, tougher intellectual property protections and lower taxes and duties for businesses. The U.S. team travels to New Delhi this week to meet with Indian government leaders.

As in other major countries, angel financing and venture capital has largely dried up in India. But that hasn’t stopped its entrepreneurs in the multimedia sector from pitching thousands of ideas, steadily growing their startups amid the downturn, and forging partnerships with bigger corporate players.

As in auto-making and the venture capital space, Mahindra knows that film producing is a high-risk endeavor that entails creative innovation, marketing buzz and a portfolio of viable products. Only a few blockbusters can rise above the rabble. Given this, Mumbai Mantra “will focus on inspiring story-telling,” he says, because “movies that do not tell a good story will inevitably fail.”

Here is a video of Monica Tata, vice president of entertainment at Turner International India, talking about the future of the country’s media and entertainment industry at the 10th annual FICCI conference on the globalization of the media.

Ed Iwata is a former staff writer who covered venture capital, business diversity, white collar crime and other topics for USA Today. He is now authoring a book and blog, Cool Global Biz, on businesses, globalization and diversity.