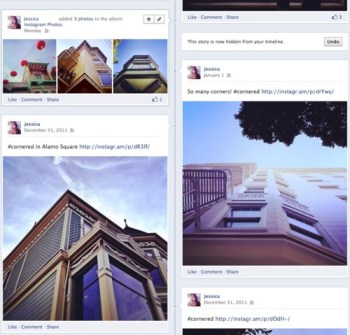 A fun little iPhone application for sharing stylized mobile captures ballooned into a social network of significance in 2011. Today, the app’s insta-photo-sharing effects are felt with increasing force on Facebook and the rest of the web.

Instagram, the still iPhone-only application, is penetrating the world’s largest social network at a rate of roughly six photos per second, co-founder Kevin Systrom shared exclusively with VentureBeat. The figure means that the filter-ific application is now contributing more than half a million photos to the Facebook experience each day.

That’s a hell of a lot of Sepia-tinted photos of bangs, food truck meals and sunsets.

For some perspective, Instagram was averaging a total of three photo uploads per second to its service at the end of 2010. It now sends twice that many photos to Facebook alone each second.

Instagram, launched on the App Store in Oct. 2010, was an insta-success with iPhone owners. The service has more than 15 million users who upload photos at a rate of more than 60 photos per second (based on 2011 year-in-review numbers). A large percentage of those folks — as much as 10 percent, based on Systrom’s revelation — love their filtered machinations so much that they push them out to Facebook for their extended networks to enjoy.

Users are also sharing their photos to Twitter, Tumblr, Flickr and other third-party destinations so much so that Instagram, which does not operate a full-fledged web experience, is now seeing 10 million page views each day and 300 million page views per month, Systrom told GigaOm Friday.

In a wise move, the startup just enabled full-sized photo-sharing for members who select to post their photos to Facebook. A photo shared with Facebook from Instagram is now added to an “Instagram Photos” album, showcased on the user’s Timeline and is large enough so that it looks to be a native part of the experience.

“It feels right to share because you’re giving your Facebook friends a great experience,” Systrom explained of the big-photo update. “The reaction has been really positive from everyone in the community and we’re glad that people see this as making Instagram even more essential in their every day flow.”

Just how important is Facebook-sharing to Instagram’s continued success? I’d speculate that there’s a strong correlation between the photos shared and the number of new users Instagram signs up each month. Systrom himself provided some anecdotal evidence to support the theory.

“We’ve always been growing fast, but I think network effects help — we’ve got millions of people who love Instagram and they spread the word for us,” he told VentureBeat in a previous interview.