Ending a rocky week on a high note, Instagram released new versions of its applications for iPhone and Android. The Facebook-owned photo-sharing property added and improved support for 25 languages and unveiled a spiffy new filter called Mayfair. 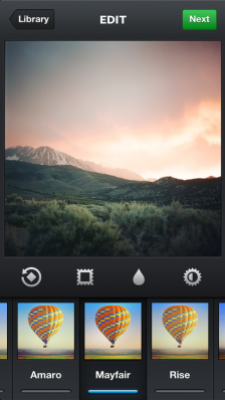 Instagram for iPhone version 3.4.1 and Instagram for Android version 3.4 now allow for 25 language translations including Danish, Japanese, Korean, Greek, and German. Both applications also include Mayfair, a filter with a thin black border, “warm pink tone,” and “subtle vignetting that brightens the center of the photograph.”

The Instagram for iPhone application also received a few additional tweaks such as native Facebook integration for iOS 6 users, the option to select photos from albums other than the device’s camera roll, and a bunch of bug fixes.

The updates, particularly the new filter and Page support, may help partially appease Instagram users who were more than a little displeased when Instagram changed its terms of service earlier this week. The photo-sharing app has since backtracked, but some users likely still view the app and its eventual plans to monetization with trepidation.