Earlier this month, app researcher Jane Manchun Wong uncovered evidence that Instagram was experimenting with concealed Like counts in posts, which a company spokesperson told TechCrunch it wasn’t considering. That is poised to change. During a keynote at Facebook’s annual F8 developer conference in San Francisco, Instagram CEO Adam Mosseri said that Instagram will later this week begin a test in Canada that involves removing the total number of Likes on photos and video views in the Instagram Feed, Permalink pages, and Profiles.

The idea, Instagram says, is to encourage followers to “focus on the photos and videos [shared]” rather than the number of likes they get. “During this test, only the person who shared a post will see the total number of likes,” the company added.

It’s not a new direction for Instagram. Cofounder Kevin Systrom, who left Facebook in October, told TechCrunch that getting away from the pressure of Like counts was one impetus for launching Instagram Stories — but the timing of the test is conspicuous. There’s growing concern about the impact of Like counts on mental health, with Twitter CEO and founder Jack Dorsey going so far as to say in a recent interview that the company would consider app designs that de-emphasize follower and Like counts. 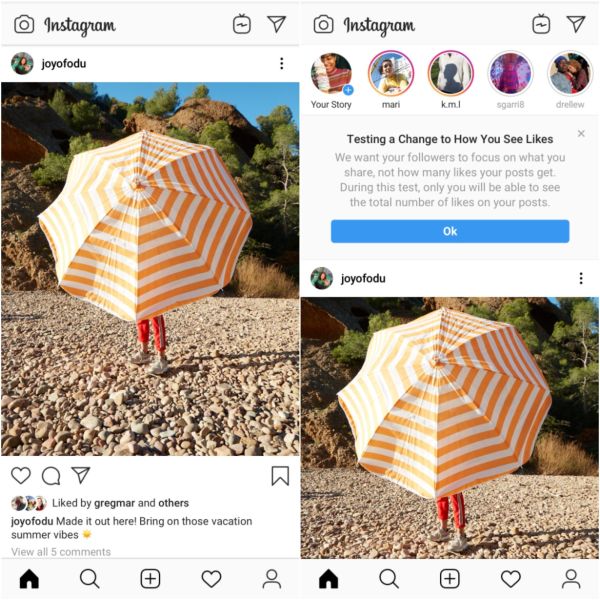 In April, a report from the British Information Commissioner’s Office, the independent regulatory body dealing with data protection and digital privacy across the U.K., suggested that Likes and other mechanisms that nudge young users (those under the age of 18) into engaging with apps should be switched off by default, or even banned entirely.

When it comes to determining whether Likes themselves are psychologically harmful, the literature is inconclusive. A survey of 300 adults that examined the correlation between Facebook Likes, self-esteem, and “sense of purpose” found no statistical link between Likes and self-esteem in respondents who reported a great sense of purpose in life. However, those who said they lacked purpose felt better when they received more Facebook Likes. Authors of a separate study report that in teenagers the same brain circuits activated by eating chocolate and winning money light up when they see large numbers of Likes on their own photos or the photos of peers in a social network.

It’s unclear whether Instagram will roll out the hidden Likes test to other markets anytime soon, if ever. But if it does choose to de-emphasize Likes at some point, the move could be a first step in repairing our fraught relationship with social media.

In related announcements, Mosseri previewed features designed to tamp down on cyberbullying and abusive comments. One — a comment filter — “nudges” users to rethink comments that might be perceived as aggressive or offensive. Another — tentatively called Away Mode — lets followers and posters opt out of Instagram “when they’re in a sensitive moment,” like when they’ve switched high schools or gone through a breakup. A third — “manage interactions” — will allow users to set limits on interactions that fall short of blocking, like preventing someone from commenting on posts but letting them favorite them.

Mosseri cautioned that the features might never roll out broadly, but characterized them as a step toward Instagram’s goal of “leading the fight against online bullying.