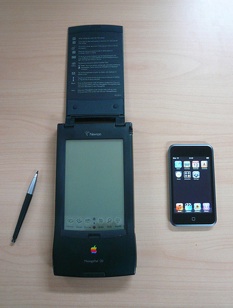 No sooner do we talk about the future of Apple mobile computing devices, including perhaps an update to its famous Newton line of PDAs from the 1990s, does a report come in that reportedly confirms the existence of such a device. During Intel’s 40th birthday celebration in Munich, Intel Germany chief Hannes Schwaderer supposedly let it be known that Apple is using Intel’s new Atom chips in a new iPhone-like device, that is larger than the iPhone.

The report, coming from the German version of ZDNet (and translated by AppleInsider) is a bit confusing because Schwaderer seems to suggest that the device the Atom is bound for is actually a version of the iPhone. However he goes on to say that it has a larger display.

It doesn’t seem to make much sense that Apple would make an iPhone that is much larger than the current version (one report has the 3G version being a little thicker, but not with a larger screen). Instead, a new Newton-esque PDA or even PDA/Tablet would seem more likely. AppleInsider reported in September of last year that Apple was in fact working on a new version of the Newton device.

While the tablet PC market hasn’t been exactly lighting the world on fire (see: the UMPC), a device that is slightly larger and more powerful than that iPhone — and uses something like 3G technology, or even AT&T newly promised super-charge 3G capable of transmitting data at speeds of up to 20 megabits per second, would probably be pretty hard to pass up for a lot of consumers. (What has two thumbs and wants one already? This guy.)