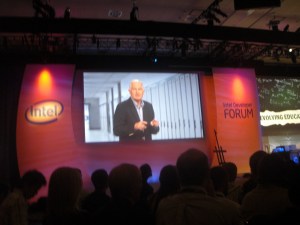 Craig Barrett, the chairman of Intel, travels to 30 countries a year. At the Intel Developer Forum in San Francisco this morning, he took his audience of thousands on a tour of how tech is changing the places he visits. While Barrett didn’t make much news with his talk, he gave useful updates on where we stand in the global adoption of technology. I found his talk akin to a compass.

I can remember years when Barrett, as CEO, came out on stage to pound home the message that Intel’s processors were better than those from Advanced Micro Devices and we would all one day be using computers with Itanium chips. Now that there are a billion Internet users in the world, Barrett is taking his foot off the pedal on that hard sell on Intel. It tells you, perhaps, how unconcerned Intel is about competition now that it has reasserted its dominance over AMD and what Barrett really cares about.

His first demo didn’t even dwell on Intel’s chips, a task he delegated to other Intel speakers. Rather, it showed how the Nintendo Wii’s remote game controller can be adapted to control a computer on a screen. Then the demo guy, researcher John Lee, showed more advanced “multi-touch” technologies that, for $50, could create an electronic white board where you can draw on a kind of chalk board with a stylus.

He highlighted Kiva.org, a nonprofit which we chronicled earlier this year, which makes it easy to use the Internet to make “micro finance” loans as small as $25 to people in the developing world. It is making loans every 30 seconds and most of them go to women. Kiva had no connection to Intel, except to solicit people to make loans after Barrett finished his talk.

In Africa, Barrett said that the continent is “coming out of the dark ages” and is among the places adopting WiMax, which extends WiFi coverage for tens of miles and thus becomes a cheap wireless broadband infrastructure in places that don’t have wired networks.

Barrett also lay on the ground while demonstrating how an emergency health card could help him in Colombia. A bar code scanner could tell paramedics his basic medical information, transfer his medical records as necessary, and give the paramedics the contact info for his doctor. They, in turn, can wirelessly communicate back to a hospital. Numerous countries are adopting this approach to healthcare.

He also said that technology is making strides in solving the world’s energy problems. He pointed to a student who was trying to make solar cells out of plastic, which is cheaper to process than silicon solar cells and thus might be more energy efficient as well.

Next year, Barrett said Intel will give away four $100,000 awards to the best innovative ideas in technology for healthcare, education, environment, and economic development.