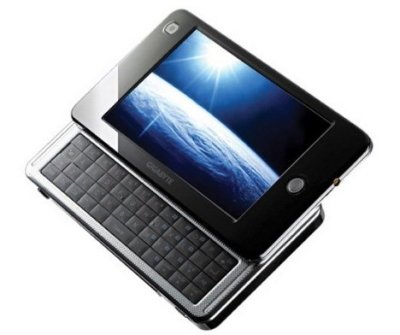 Intel has been touting mobile internet devices, or MIDs, as the next big wave of innovation for a while now. These devices are smaller than laptops and don’t have full-size keyboards. Their main purpose is to access the internet, and they’re actually more like phones than computers.

LG plans to create a MID that will be a hybrid of cell phone and computer. It will use Moorestown, the next-generation Atom microprocessor that Intel designed to break into the mobile phone and MID markets. Moorestown will debut in 2010. (The MID pictured above gives you an idea of what these will look like, but that’s not the LG design itself.)

The companies will announce the deal at the Mobile World Congress in Barcelona, Spain next week. The MID will use the Moblin v2.0 Linux-based operating system. LG and Intel say they want to enable a rich internet experience on the mobile device while delivering many of the same functions of a smartphone.

This deal is important for Intel because it could help the company expand beyond the PC. Years back, Intel tried making its own ARM-based cell phone processors. But the company retreated, sold off the business, and is now trying again with the Atom family, which is based on standard x86 computer architecture. With LG, Intel has a foot in the door to participate in the cell phone chip market once again.

LG launched a netbook, a low-end computer with a full-size keyboard, in the fourth quarter. That machine also uses an Intel Atom processor. Many people have been skeptical of Intel’s hopes for the MID and netbook markets, but now the company has a real customer to prove the naysayers wrong. The Moorestown chip will be based on Intel’s 45-nanometer manufacturing technology. LG is working with Ericsson to enable 3G data network access for its planned LG MID.