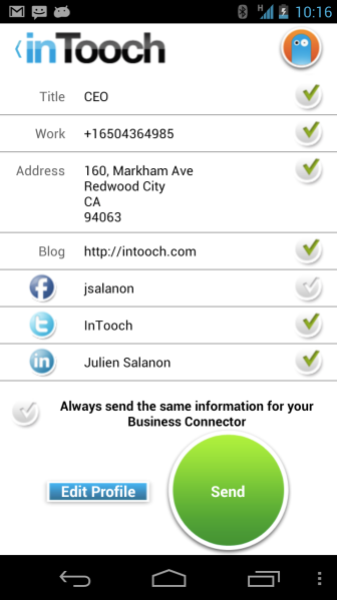 Business cards are a pain because you have to remember to transcribe or scan them before they’re truly useful.

And most apps that aim to replace them fall short because they depend on both you and the people you meet using the same app.

Enter InTooch, a utility for connecting you with the social media profiles and contact information of the people you meet using nothing more than a phone number.

Whenever you meet a new person, all you need to do is get their phone number. When you call it, the InTooch app (free for iPhone or Android) detects that it’s a new number and opens up automatically. It lets you choose the type of connection you want to make (business or personal) and lets you tick off the information you want to share with the other person, such as your contact info and social network invitations.

The recipient doesn’t need to have InTooch. If they do, the connections are made automatically within the app. But if they don’t, they’ll receive a text message on their phone that directs them to a URL where they can download your contact info and make the connections to you via Facebook, LinkedIn, Google, or what have you.

“Two years ago, I went to a mobile conference and had forgotten my business cards and lost a lot of potential business opportunities because of it,” says chief executive and cofounder Julien Salanon. “I downloaded several apps at the event to solve this business-card issue, but none of them worked. So every time I ended up calling the other person to leave my mobile number. That’s when I got the idea to enhance those natural connections with InTooch.”

InTooch started in Paris in 2010 and moved to the U.S. this year. It incubated at the HEC School of Management, and the app entered beta testing in partnership with SFR, France’s second-largest mobile operator. The company has raised a seed round from former Netgem founder and angel investor Olivier Guillaumin, who is based in Paris, and is actively seeking additional funding. 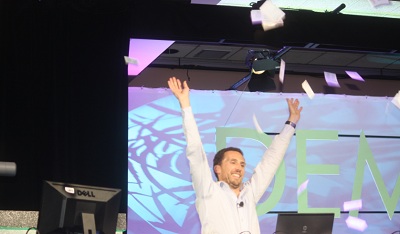 The app is currently available only on Android and iPhone, but, says Salanon, “We obviously plan to support all platforms and devices and want to be ubiquitous in the marketplace.”

It competes with contact-sharing apps like CardFlick and Mover. You could say it also competes with the built-in contact-sharing and invitation features of LinkedIn and Facebook, but it’s really more of an extension to those networks. And because it doesn’t require recipients to have anything more than SMS, it’s unusually open-ended. As such, it looks like a handy utility.

It may not be an idea to rival the next Facebook, but it promises a level of convenience that could eventually make paper business cards all but extinct. I’m crossing my fingers for that. At the close of the talk, Salanon said that InTooch will free everyone from business cards for good — and he tossed a bunch of business cards in the air (pictured above).

In the on-stage presentation, they probably won the award for most sex jokes. (“I definitely see a poking coming on.”)

InTooch is one of more than 75 companies chosen by VentureBeat to launch at the DEMO Fall 2012 event taking place this week in Silicon Valley. After we make our selections, the chosen companies pay a fee to present. Our coverage of them remains objective.