Apple is said to be be rolling out another iPhone software update any minute now, according to The Boy Genius Report. [Update: It’s here, see the bottom.] The 2.0.2 update apparently will consist mainly of performance improvements.

It’s not clear if this will be the update that fixes the connectivity issue some users are having with the iPhone and AT&T’s 3G network. A reader of the Apple news site MacRumors claims to have gotten an email from Apple chief executive Steve Jobs saying:

“We are working on some bugs which affect around 2% of the iPhones shipped, and hope to have a software update soon.”

Of course, anyone could have said that, but as MacRumors notes, Jobs has been known to send out these quick messages in the past. This combined with the fact that this software update appears ready now lends some credence as well.

This past weekend I was out of town and had to shut off the 3G connection because it was constantly dropping the connection and attempting to switch back to the slower EDGE network. While some have said the device’s connectivity problem is a chip problem and could lead to a total recall (not of the Arnold variety), others think a simple firmware update will do the trick.

The 2.0.1 software update was launched exactly two weeks ago. While it corrected some issues involving speed (particularly the responsiveness of the keyboard and contacts), it also created new problems for some users.

Much like the last update it is only said to contain “Bug fixes.” 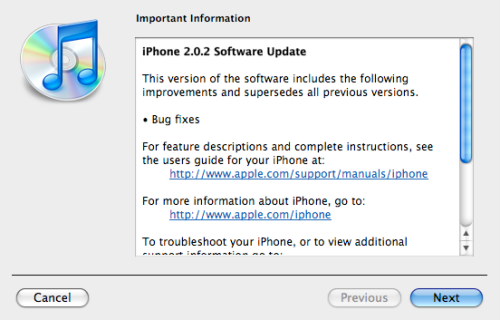