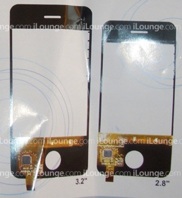 Depsite the plethora of reports, many people, including myself, are still having a hard time believing Apple will sell the 3G iPhone for only $199. So here’s another option: What if Apple is planning to sell an iPhone for $199, but it’s not the new 3G version, it’s a reworked, smaller 2.5G version?

Some new photos that appeared on iLounge today are fueling speculation that Apple could have an iPhone Nano device ready to go at Monday’s WWDC. Such a device was the first possibility we spoke of in our list of potential keynote curveballs a few weeks ago.

These photos appear to show faceplates for both a 3.2 inch diagonal iPhone and a 2.8 inch iPhone. The original iPhone is 3.5 inches diagonally. These come from a Taiwanese company which claims they are being used in a new version of the iPhone.

An iPhone Nano that lacked 3G, GPS and a few other features (video streaming?) could potentially have great battery life and be sold significantly cheaper than a 3G model. As the iPod product line has proven, not everyone cares about all the bells and whistles, and instead prefers a smaller form-factor and cheaper price.