Iraq has blocked the URLs of 20 web sites since the Islamic State in Iraq and Greater Syria (aka ISIS) launched its violent takeover in Northern Iraq two weeks ago. The blocked sites include Twitter, Facebook, and Viber.

But seven websites that are either maintained by ISIS or support its bloody rampage have been left alone by the Iraqi government, leaving some to wonder about the government’s intentions as it battles to stave off its own collapse. 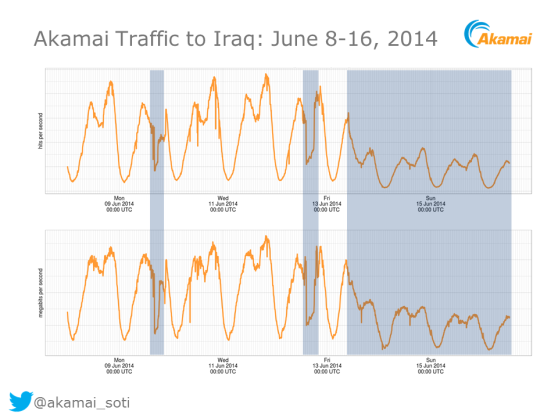 Two of Iraq’s largest cities, Mosul and Tikrit, fell to ISIS two weeks ago. The Iraqi government responded by severely restricting average Iraqi’s Internet access and by cutting off all social media and video sharing sites, according to a comprehensive report on Iraq by Citizen Lab, a Canadian research group focused on information and communication technologies. According to Citizen Lab:

“The websites our tests found to be blocked represent a small number of content categories, and generally correspond with the list of sites ordered to be filtered by the Iraqi Ministry of Communications. We also tested the accessibility of 7 URLs of sites which are affiliated with or supportive of ISIS. We did not find any evidence, through both DNS lookups and proxy testing, that any of these URLs are blocked.  Given that the insurgency was cited as the rationale for the shutdown and filtering, this finding is curious.”

A former U.S. intelligence official told VentureBeat that one reason for the Iraqi government to keep the ISIS sites accessible within the country is so that Iraqi intelligence officers can monitor the sites and track their users. Whatsapp and Skype have also been blocked, leaving many Iraqis scrambling to get around the blockage using proxy servers in neighboring countries or portable hot spots synched to smart phones. You can read Citizen Lab’s excellent report on Iraq here. To help get around the blockage, Iraqis have reverted using a circumvention app called Psiphon, according to Citizen Lab.