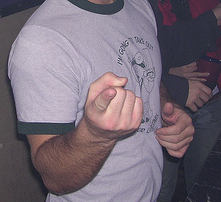 Apparently, Apple has a say in what is useful.

A rejection letter from Apple obtained by MacRumors details why an application called Pull My Finger was not accepted into the App Store. While you might think it had to do with it being mildly inappropriate, the letter actually states that it was “of limited utility.”

But how is Pull My Finger any less useful than the current number one paid application, Koi Pond, MacRumors rightly asks? Pull My Finger is an application that allows you to do just what it says, pull a finger. (Naturally, you get the sound you’d expect to follow.) Koi Pond presents a virtual pond with virtual koi that you can move around. Neither seem to do anything of “utility.”

If Koi Pond could be considered a work of art (or a very boring game), couldn’t Pull My Finger be considered a humorous app? Should either of those genres have more value than the other?

It would seem one of two things is happening within the App Store: Either Apple thinks the application is inappropriate and just doesn’t want to say that. Or, it is realizing that the store is quickly filling up with a lot of useless applications and wants to stymie that growth.

It’s also interesting that Apple suggests the developer spread his app through the Ad Hoc method, which involves someone giving you access to your iPhone’s identification number so an application can be manually transfered. Will we soon see someone set up a listing of applications that can be installed Ad Hoc but that Apple will not allow in the App Store?

Find the video of Pull My Finger below.