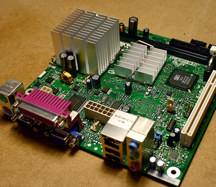 Apparently tired of using the same basic architecture in its computers that its other Windows-based rivals do, Apple is thinking about not adopting Intel’s so-called Montevina chipset, the key component of Intel’s Centrino 2 platform, according to AppleInsider.

This does not mean that Apple would stop using Intel CPUs, just its chipsets which usually controls everything else in a computer. AppleInsider even throws out there that Apple may have its eye on a new set by Intel-rival AMD which includes faster integrated video, Hyperflash I/O and support for Hybrid Hard Drives (regular hard drives with flash components means to load faster). Imagine that, Intel chips and an AMD chipset.

Apple could also possibly design its own custom chipset. The company used to have customized chipsets before its transition to Intel processors in 2006.

Any new architectural changes would supposedly take place in Apple’s upcoming notebook overhauls due this fall. These new notebooks could be radically different with elements such as glass trackpads, according to Computerworld. But that report also says Apple may use Centrino 2.

Apple seems to be in the mindset that it has a winning product with its Mac line, now it just wants to speed things up. Its upcoming new operating system, OS X 10.6 Snow Leopard, is apparently not going to be that different from OS X 10.5 Leopard, it is mainly designed to run quicker and more smoothly with lighter-weight apps.

We have an email into Intel about this possibility. I’ll update if I hear back.

Update: As expected, Intel responded that it wasn’t sure what Apple’s plan were.

Update 2: Dean McCarron, analyst with Mercury Research thinks such a move is unlikely.

As he tells us:

Montevina uses the P4 bus and everyone but Nvidia is exiting that market (VIA is all but done and doesn’t have a P4 license anymore, it expired in April. AMD is, well, AMD, and has been seriously ramping down their chip set production.)

If anyone would do it, it’d be Nvidia, which is ramping up its Intel-capable chip sets. So it’s possible, but a bit of a long shot; I’d be more certain if we knew what Apple’s motives would be.