This degree of critical mass protected Facebook against any real and immediate fallout from the Cambridge Analytica data-sharing scandal. The social media giant’s reputation may be battered, and some users will certainly jump ship, but most won’t ditch the social network because their social lives are constructed around it. To leave Facebook with all your friends in tow would require organizational skills of Herculean proportions, and for that reason a mass exodus is just not going to happen anytime soon.

But the idea also raises questions about where people would go if they were to leave Facebook. Over the years, a number of self-proclaimed “Facebook killers” have emerged from the shadows, only to disappear as soon as people realized that most of their friends were still on Facebook. Even the mighty Google tried its hand at defeating Facebook with Google+, but we all know how that one ended up.

To buy or to copy, that is the question

Facebook is just too goddamn big, and it’s too entrenched in the social fabric of our lives. When a promising alternative does come along, Facebook is likely to do one of two things: buy it or copy it.

Earlier this week, Facebook announced it was shuttering a triumvirate of apps, including one called tbh. By way of a quick recap, tbh was an anonymous teen social networking app that had built a user base of around 5 million before the deep-pocketed Facebook snapped it up for a reported $100 million last October. Despite promises to keep the app alive, Facebook killed it just nine months later.

Then there’s Snapchat, which Facebook famously failed to acquire. Facebook’s mantra since then has essentially been: “If you can’t buy it, copy it.” Snapchat has been the one social network that stood a fighting chance of knocking Facebook off its pedestal — even just a smidgen — but Facebook has done a stellar job of appropriating core Snapchat features and launching them on its own platform. As VentureBeat wrote last year, Facebook is stunting Snap’s growth by sitting on it.

Despite all of the above, there are still companies hoping to make their mark in the social networking realm with “Facebook alternatives.” One of those is MeWe, a “next-generation” social network that positions itself as the anti-Facebook: “Your private life is not for sale. No ads. No Spyware. No BS,” its website proclaims.

Today, MeWe announced it has raised a modest $5.2 million in funding from Lynda Weinman — founder of online learning platform Lynda.com, which was acquired by LinkedIn for $1.5 billion — among other authors and entrepreneurs, including Marci Shimoff, Rachel Roy, and Jack Canfield. This takes the company’s total funding to $10 million.

MeWe is a product of Sgrouples, which was created by Mark Weinstein in 2012, and it was under the Sgrouples brand that the platform was developed and tested in stealth ahead of the MeWe launch in 2016.

Available for desktop and through native mobile apps, MeWe sports features that will be familiar to anyone who has used Facebook, including group and private messaging, a news feed, events, and groups. The general look and feel is very reminiscent of Facebook, which should ease friction for anyone serious about jumping over from the dark side. 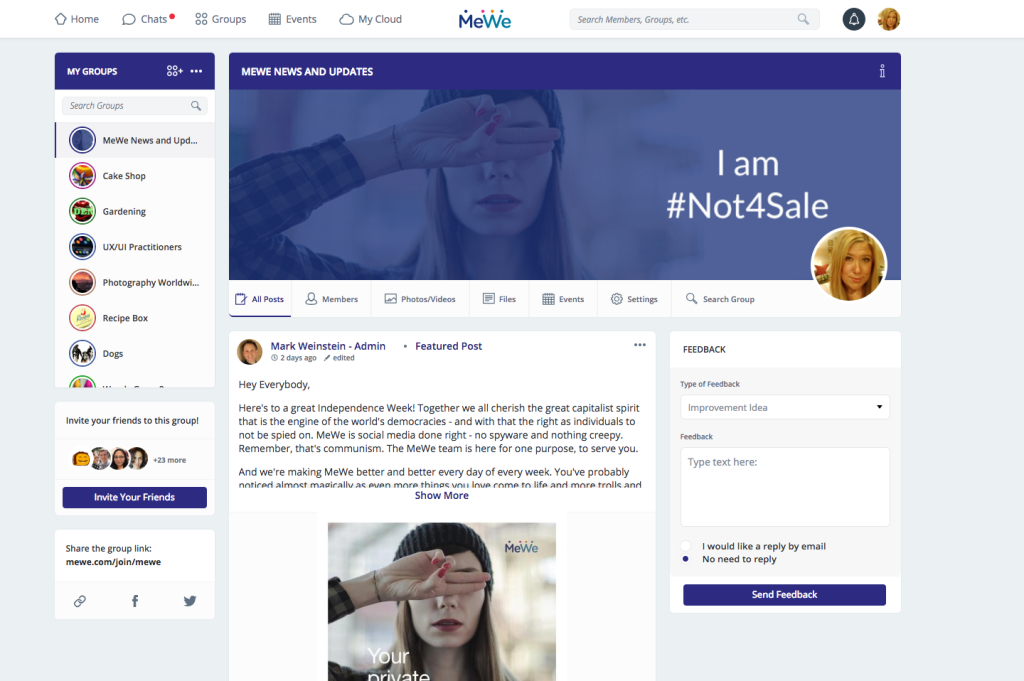 But how does MeWe make money if it’s not bothered with advertising? Well, users can shell out for additional features and functionality. An account comes with 8GB of cloud storage a month for photos and videos, but users can pay $5 per month to increase that limit to 50GB. They can also pay $1 per month to access “secret chats,” or $1 for a packet of custom emojis, among other add-on services.

Interestingly, MeWe actually has a sister product called MeWePRO, which is angling for a market currently occupied by the likes of Slack and, again, Facebook, with its Workplace platform. The business-focused social collaboration tool costs around $75 per year for each employee, though it’s free for nonprofits and educational institutions.

Weinstein told VentureBeat that since Facebook’s Cambridge Analytica scandal, MeWe membership has grown by 40 percent, and it now claims more than 2 million users who log in an average of eight times each day.

This is a drop in the ocean compared to Facebook, of course, but Weinstein is betting that a focus on privacy and user control, with a real-time news feed that isn’t inflicted by algorithms, will help it continue to gain steam in the months and years ahead.

While there may be scope for MeWe to serve as an alternative rather than a replacement to Facebook, Weinstein does not have modest aspirations. He projects that the platform’s user base will grow to 6 million members this year, 30 million next year, and — wait for it — 500 million by 2022.

“In the future, MeWe will also revolutionize social media with decentralization, which will render Facebook’s spying and tracking data model completely obsolete,” Weinstein added, a comment that suggests he is indeed trying to replace Facebook. “Awareness around the world has never been higher regarding news feed manipulation and privacy infractions. Government regulations will never truly interfere with Facebook’s data collection model, evidenced in both California’s new 2020 privacy rules and Europe’s GDPR. But the free market can — and MeWe is here giving people great communication technology in a true multi-feature platform, with none of Facebook’s BS.”

Others who have tried and failed to provide a viable alternative to Facebook include Ello, which launched with fanfare several years ago but is now a platform for artists. Path was once a shining light in the social networking realm, but it died off and was eventually bought by Asian tech company Daum Kakao. A few others show promise, such as Vero, which now claims 3 million users.

MeWe has bold ambitions, for sure, but in reality people are not likely to flock to Facebook alternatives for all the reasons we mentioned earlier. Most users will stick with Facebook because that’s where all their friends are, regardless of the company’s less-than-exemplary attitude to user privacy. And the demographics that are most likely to sidestep Facebook — teenagers and young people — are more inclined to join a social network that is not so Facebook-y. Snapchat, YouTube, and Facebook’s other property, Instagram, are examples of the kind of platforms currently enjoying popularity with teens. All of which is to say that taking on Facebook may prove a thankless task.