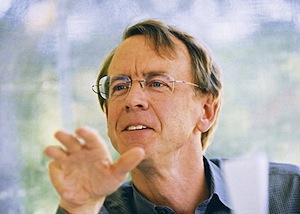 There’s no official word on what Kleiner will reveal, but a fund for startups building Facebook applications, integrating with Facebook in other ways, or maybe just for social startups in general seems like the most likely news. Besides Doerr (pictured left), Kleiner says executives from Amazon, Facebook, and Zynga will attend.

The last time Kleiner held a press event, it announced the expansion of its iFund for iPhone and iPad startups. PEHub’s Connie Loizos argued last week that the iFund has done a lot to restore Kleiner’s reputation as a firm to be reckoned with outside of cleantech, particularly with Kleiner making $100 million in the acquisition of mobile gaming startup Ngmoco.

The firm has already had success with Facebook startups, since it invested in Zynga, which is rumored to be preparing for an initial public offering. Zynga chief executive Mark Pincus argued earlier this year that the business opportunity on Facebook’s platform still dwarfs that on Twitter or the iPhone.

Facebook previously partnered with Founders Fund and Accel on an incubator and seed investment fund called the fbFund, but the program has been closed down. Now the firm is working with incubator Y Combinator to provide startups with special access to Facebook support and features.