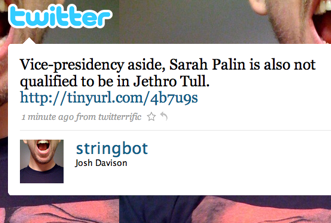 Twitter started out as a service in which you were given 140 characters to give mundane updates about your activities at any given moment. That’s why you still see the “What are you doing?” question above the text input box on the site. But somewhere along the way that input box evolved into a forum for more meaningful discourse. Political debate in particular seems to be popular and may be driving usage of the micro-messaging service, according to some new data released today by Twitter.

While the service claims that Fridays are normally a down day, last week, Friday marked the first Presidential debate between Republican candidate John McCain and Democratic candidate Barack Obama. Twitter notes that Friday’s overall updates jumped 18.5 percent from the previous week, with the time during the debates seeing a huge 160 percent surge in updates.

More promising to Twitter though has to be the number of users who signed up for new accounts. It claims that signups rose 23 percent last Friday, with signups during the debates rising 135 percent when compared to the week prior.

That would seem to make sense given the buzz and press Twitter has been receiving recently from the likes of CNN and CSPAN, which are both integrating Twitter into their news coverage. Friday also featured an event with digital media television and Internet channel Current teaming up with Twitter to showcase the debates. Former Vice President of the United States (and former Presidential candidate) Al Gore, who is one of the founders of Current, was on hand for the event. (Check out the picture below of Gore standing just in front of VentureBeat’s own Eric Eldon.)

Twitter also launched its own Twitter Election 2008 site last week in time for the debates. It’s promising to add a bit of “polish” before the next debate (a Vice Presidential one) that will take place on Thursday.

Certainly political debate is more intriguing (at least to some people) than mundane updates, so it makes sense that Twitter usage is surging around that. But it’s somewhat surprising that users aren’t more frustrated by the 140 character limit that Twitter imposes. Though, I guess that stops some users from being too big of blowhards or pontificators. 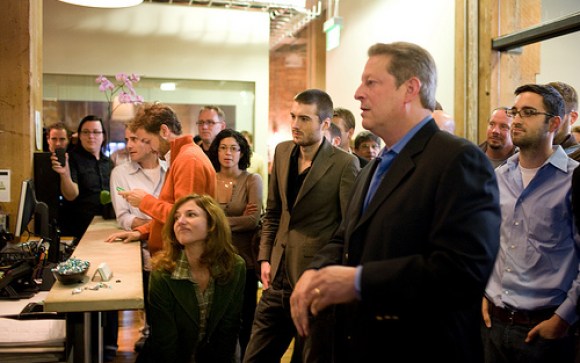