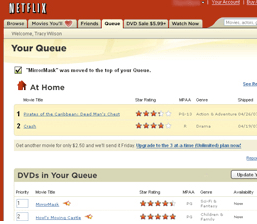 The first phase of Netflix’s plan to enter the living room is so far proving to be a success. Less than two weeks after the release of its set-top box made in partnership with manufacturer Roku, the device is completely sold out. It’s so popular, in fact, that the companies don’t expect the back log to clear up for perhaps two months.

Could we be looking at another Nintendo Wii situation?

That video game console was release in time for the holidays two years ago but sold out immediately. To this day it is still very hard to find one in stores. One of the reasons for its popularity: It’s compelling price. While a Wii is $249, the Roku is $99, making it perhaps even more enticing.

But there are major differences of course (aside from one being a video game system and the other a movie player), the Roku box requires that you have a subscription plan with Netflix. But seeing as the service has over eight million subscribers, many of whom already pay nearly $20 a month, it’s seems pretty reasonable to think that a lot of them will desire this box and availability could be limited for a long time.

Of course it’s important to note that actual sales numbers were not released. This seems similar to when Amazon’s e-reader device, Kindle, sold out very quickly yet no one had any idea how popular the device actually was because Amazon would not disclose how many were sold. It could have been 100, it could have been 100,000.

Netflix is planning to team up with other vendors to get its streaming video service on more devices as well later this year. One of these partners is known, LG, while others have been speculated upon, most notably, Microsoft which could use the service on its Xbox 360 gaming console. That would be a formidable pairing — especially for Microsoft rival Apple, which has its own set top box in the Apple TV.