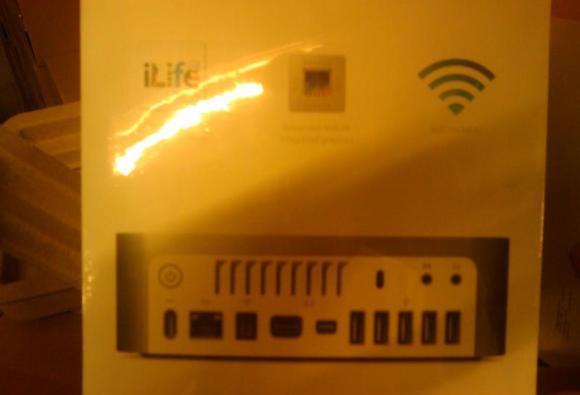 As rumors continue to mount about Apple closing in on launching some new products, today brings a picture that may or may not once again show the backside of the Mac mini revamp. The picture, posted first by MacRumors on a sub-page of its site because it thought it to be fake, may not be fake after all.

While it seemed odd that Apple would feature the back of the machine on its box, it actually does this on the current Mac mini box, as MacRumor’s Arnold Kim notes. Another site, One More Thing, received the same picture and believes it to be real.

The back of the Mac mini featured on the box is the same back that has been circulated in other pictures recently. Some were certain those pictures were fakes, but a video of the same device at least seemed to rule out the Photoshop theory.

This supposed back of the box also features a picture of an NVIDIA chip, which is almost for sure going to show up in the updated Mac mini, just as it has in other recent Mac products.

A rumor circulated yesterday had Apple holding an event on March 24. Such an event, if real, is likely to showcase new hardware such as the Mac minis and iMacs. It could also feature new Mac Pros and Apple Cinema Displays. A separate report by a Japanese site a few days ago indicated that the iMac, could be updated as soon as tomorrow.

Update: Multiple reports are now suggesting that the Mac mini and iMac updates could indeed come tomorrow. MacRumors has reposted some of the rumored specs (which are partially in Dutch):

If tomorrow is the day for the new products, does Apple still have an event in store for the end of March? It seems unlikely it would have an event just for Mac Pros, as they’re way too expensive for most consumers — as are Cinema Displays, the other product rumored to be updated soon.