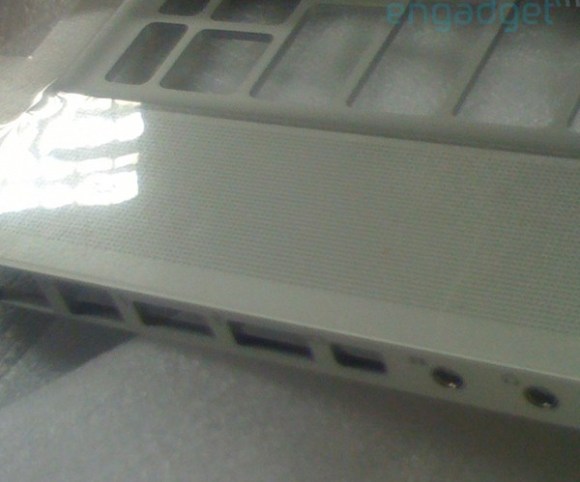 Tension is building as we head into the second week in October and Apple has yet to reveal if it will unveil new MacBooks this month. The original rumored date for an unveiling was October 14, but that is now only 6 days away and no one (including us) has received an invitation to any kind of event. It’s possible Apple could unveil the the MacBooks without an event, but given all the speculation about this being a complete revamp, that is unlikely.

Today, however, brings a supposed leaked shot of the new MacBook Pro casing. This is the computer thought to be built from a solid brick of aluminum using lasers and jets of water. Gadget blog Engadget published the picture earlier today, but it is said to originate from this Chinese web site.

There isn’t much in the picture, but those familiar with current MacBook Pros will recognize it as having several ports in different places. The speaker holes also appear to be much smaller (are they cut with freakin’ lasers?), and the whole thing does look to be a bit thinner. Also, the keys are clearly separated in a fashion that you can now find on the MacBook and MacBook Air lines, but not on the current MacBook Pros (which has the older, traditional keyboard). All of these are in line with previous rumors about the device.

It’s hard to tell if this is cut out of one piece of aluminum. It looks as if the side and top are two different pieces put together, as Engadget notes.

Is this the real deal? We’ll see — but probably not on October 14.