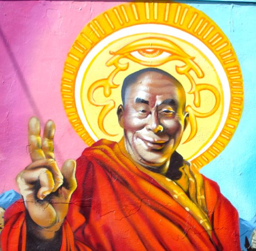 Despite widely circulated reports over the weekend that His Holiness the Dalai Lama had joined the micro-messaging service, the account at OHHDL (apparently for Office of His Holiness the Dalai Lama) has been suspended by Twitter “because it violated our Terms of Use regarding impersonation,” Twitter co-founder Biz Stone writes on the Twitter blog today. Twitter has rules against users attempting to “mislead, confuse, or deceive others” with their Twitter accounts, Stone continues.

It’s good that Twitter acted so quickly to remove the account in this instance, but it’s a growing problem as the service continues to gain popularity. Last year, a fake account tied to former Vice President Al Gore was created just days before the real Al Gore showed up on the service. This led to a lot of confusion. It’s simply hard to know who is real or who is fake until someone gets a confirmation of the identity or Twitter bans the account, indicating its inauthenticity.

If there is one good thing that comes out of this incident, I would bet the office for the actual Dalai Lama will now probably join Twitter. If for nothing else, at least he can cut out the name squatters and impersonators — the unenlightened Twitter users, if you will.