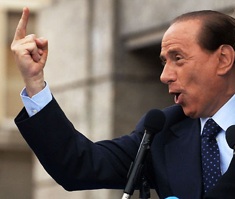 Some companies you don’t want to mess around with. It’s one thing for the media conglomerate Viacom to sue Google for a billion dollars over YouTube, but it’s another when a television company owned by the Prime Minister of Italy files a lawsuit. Such is the case with Mediaset SpA, Prime Minister Silvio Berlusconi’s television company. Might we have an international incident on our hands?

The suit, which has Mediaset seeking “at least” 500 million euros (about $779 million), charges that YouTube has participated in the illegal distribution and commercial use of its content, according to Bloomberg. Specifically, the company did some digging on June 10 and found over 325 hours of Mediaset footage on YouTube in nearly 5,000 video clips.

While it’s not anywhere near the 160,000 unauthorized clips that Viacom is suing YouTube for hosting, it is quite a bit of illegal footage. And when you have the leader of a powerful nation leading the charge, it’s going to be taken very seriously.

While certainly Mediaset would seem to have grounds for this lawsuit, it doesn’t address a larger issue, which is: How much does YouTube really take away from traditional broadcasting? Provided it’s not an entire episode of a television broadcast, I’m of the mindset that YouTube works as more of a promotional tool for much of the content on it. Some Hollywood studios are starting to agree as we’re seeing deals like the one between Lions Gate and YouTube.

Mediaset claims that because of the clips being available online, it lost 315,672 broadcasting days. We all know that isn’t true. I don’t think I’m really going out on a limb in saying that most of the people who saw the clips online probably wouldn’t have been watching were it not there.

Also not exactly true is YouTube’s statement on the matter:

“YouTube respects copyright holders and takes copyright issues very seriously. There is no need for legal action and all the associated costs. We prohibit users from uploading infringing material, and we cooperate with all copyright holders to identify and promptly remove infringing content as soon as we are officially notified.”

If it were, Mediaset wouldn’t have found those clips.

The point is that YouTube and these media companies need to start figuring out how to work with one another. If all the conglomerates start suing Google and force them to shut down YouTube, users will be up in arms — and then they’ll move on to whatever the second biggest video sharing site is and start uploading illegal clips there.