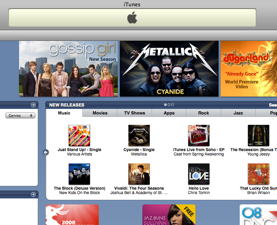 The next version of iTunes, version 8, is set to launch on Tuesday with a few new features, a tipster tells Digg founder Kevin Rose. Normally, I’d be skeptical of such a rumor, but Rose did nail the September 9 Apple event date and appears to be dead-on in terms of what the new iPod nanos will look like based on product case shots out in the wild.

A new kind of music recommendation engine. While iTunes in the past would recommend songs from the iTunes Music Store that you might like based on past purchases, Genius will supposedly scan your entire music collection and give recommendations.

The more interesting aspect is that it will apparently select songs that you already have and arrange songs that are alike to give you a more cohesive listening experience. It’s not clear how exactly this will work, perhaps it could measure songs’ beats per minute (BPM) and transition to other songs with similar ones.

Looking at iTunes right now, it appears that the area formerly known as “Just For You” has disappeared, giving more weight to this rumor.

Pretty straight forward, iTunes will supposedly include a new way to browse you music in grid alignment. This would be in addition to the List, View with Artwork and Cover Flow views.

Some new, albeit interesting things to look at while listening to you music.

Currently, iTunes only offers the high definition (HD) option for select films rented over its Apple TV device. This apparently will expand to television shows as well with iTunes 8. It’s not clear if this will again be limited to the Apple TV or if any iTunes computer user can now gain access to HD content.

If true, this means one thing to me: Goodbye cable.

Again, it’s important to note that all of these developments are still very much rumors. That said, iTunes 8 does seem likely as it’s been two years since iTunes 7 launched. It seems unlikely that Apple would launch a new version of iTunes without some pretty big changes. Depending on how well Genius works, this could be significant in cementing iTunes places as the best music jukebox software.