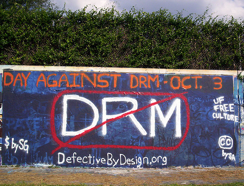 Apple has digital rights management (DRM)-free music for sale in its iTunes store under the name iTunes Plus, but the selection is weak when compared to the likes of the AmazonMP3 store. While Amazon has all of the major labels supplying it with DRM-free tracks, Apple still only has EMI on board (the other major labels only allow Apple to sell DRM-laced tracks). But another major label, Sony BMG, is about to go DRM-free with Apple as well, if 9to5 Mac’s “hunch” is to be believed.

These tracks from Sony, which would be the same quality as other iTunes plus tracks, 256kbit, would greatly improve the iTunes music store’s selection. While iTunes may be the leader in sales not only online, but now for all of music retail, it has been hamstrung by selling an inferior product. This hasn’t mattered so far, but eventually it could.

Apple is selling a proprietary form of music, what happens if, in say 20 years, there are no more iPods (God forbid), almost all of the music bought through iTunes could be worthless. That probably won’t happen, but the fear of lock-in alone prevents me from shopping on the iTunes store — I use Amazon. And that’s really too bad because iTunes offers such a better user experience than Amazon’s store, and I use iTunes to organize all my music and sync it. The recent addition of the Genius feature to iTunes also underscores how powerful iTunes could be if it had all DRM-free tracks. I would probably be buying recommended music at a rapid pace in the new Genius sidebar, but instead if there is something I like, I go to Amazon.

Of course, the lack of DRM-free tracks from the other major labels is hardly Apple’s fault. After gaining so much control over the labels while the compact disc business declined, Apple is now seemingly facing a backlash where the labels hope another power can step in and challenge Apple’s dominant position. It’s only real leverage in this battle, is giving other music stores DRM-free tracks, while withholding them from Apple.

This has put Apple chief executive Steve Jobs in a bit of a troublesome spot, as he promised that half of all iTunes music would be DRM-free by the end of 2007 — and here we are at the end of 2008, and that still isn’t true. The addition of Sony may put them over that mark, but iTunes would still be far behind Amazon in terms of total DRM-free tracks. And to add insult to injury, Amazon sells much of its tracks for cheaper than iTunes does.

9to5 Mac offered no more details on the Sony deal, but indicated it should happen within the next several weeks or months — a nice wide open window. MacRumors tries to get a bit more specific by guessing we could hear an announcement at MacWorld in January. If the other two major label holdouts, Universal and Warner, are on-board for DRM-free tracks by then as well, there should be no stopping iTunes for the foreseeable future.