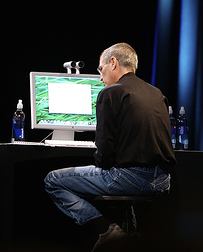 The rumor of Apple unveiling an “iTunes Unlimited” option for its popular digital music store always gets people in a tizzy. After all, who wouldn’t want to have access to large chunk of the service’s library of music anytime they wanted for a flat fee?

After laying dormant for several months, the rumor popped up again yesterday when messages from anonymous sources went out to a few Apple blogs claiming to have details about the service which would be unveiled in September and launched in October. The details seemed somewhat plausible, though the apparent tie-in with MobileMe seemed a bit odd. Still, as I noted, I wasn’t buying it.

Apparently, neither are the music executives whose music would be sold through such a plan, according to Silicon Alley Insider. Though it will only say it checked with a “variety” of executives at “major” music labels, the tech blog feels confident enough in those sources to write today that iTunes Unlimited isn’t happening.

Is it possible execs at the labels would lie about a plan? Sure. After all, the original Financial Times report back in March said Apple was holding talks with “big music companies,” and I would have to assume there is some overlap between the “big music companies” and the “major” labels that SAI speaks of. But more likely is that it’s not happening anytime soon.

That’s not to say talks of some kind aren’t happening. They probably are. As the music labels continue to combat piracy, talk of trying various business models for music continually comes up. The head of Sony BMG earlier this year said that there was a possibility of a subscription-based digital music service that would work on all portable devices, and mentioned the iPhone as one of them. A subscription-based service implies some sort of copy-protection and for that to work on the iPod it would probably have to work through iTunes.

But for now we’ll continue to wait for iTunes Unlimited. And I’m fine with that, especially if Apple actually charge the rumored $129.99-a-year for unlimited access. That’s more than I spend on iTunes music now, and more than I ever plan to.