The life-streaming site Jaiku has come back online after being down the entire weekend and the first part of this week while it moved to Google datacenters. While the look and feel of the service are exactly the same as before it went down, users were greeted with a shiny new terms of service (TOS) agreement to accept. The big news though is that now users have unlimited invites to send out.

Almost immediately after purchasing Jaiku in October of last year, Google closed it to the public. New sign ups only occurred if you happened to know someone with a some invites left. It’s still not clear why Google did this and basically neglected the service that seemed poised to take on Twitter, but at least it finally appears to be changing its stance.

Of course, Google may not be doing anything at all with it just yet. Jaiku originally went down due to a server issue and it sounds like this forced a move to Google’s servers a bit ahead of schedule, according to its blog post. 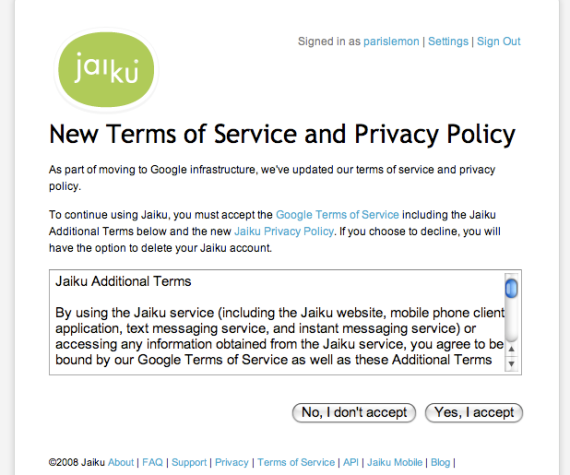 I’ve always liked the feature set of Jaiku. You can automatically import items from feeds and other services. In fact, it was a bit more like FriendFeed than Twitter in that regard. However, the importing of items has only worked about half the time on Jaiku the past few months. Worse, long page load times rendered the service basically useless to me.

We’ll see if this move to Google servers changes anything. One would have to assume that if it is giving out unlimited invites, Google thinks the service is ready to use again. Already, podcaster Leo Laporte, a longtime Jaiku fan, is reporting service speeds to be a lot faster.

Find me on Jaiku here.