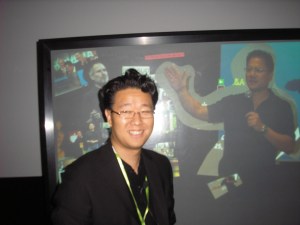 If you’re watching the election coverage on CNN, you’ll see the commentators sweep their hands over an electronic map on a flat-panel TV, bringing up data about each state with the touch of a finger.

Today is a crowning moment for the new technology that CNN calls a “Magic Wall,” created by Jeff Han, a New York University researcher who heads the start-up Perceptive Pixel. Han has been a pioneer of multi-touch technology that is starting to become pervasive as a more intuitive way to control a computer.

It’s a futuristic technology, reminiscent of the computer that Tom Cruise controls in the movie “Minority Report.” Han created the touch-sensitive technology to move computing beyond the stale mouse and track balls. Han said earlier this summer at the Nvision 08 conference in San Jose that a lot of three-letter agencies in the military and intelligence communities had adopted it. Time named him one of the top 100 people in 2008.

Han’s man-machine interface (with 60 inch and 100 inch screens) is much more intuitive and it allows multiple people to collaborate on the same machine. Every pixel on the display is a pressure-sensitive sensing element.

Han said in August that the screens cost around $60,000 to $200,000 now. It started shipping in January 2007. Han’s focus is on the software, but he had to develop the displays as well because no one else made such screens. Han said the self-funded company is considering raising money. It has 10 employees. 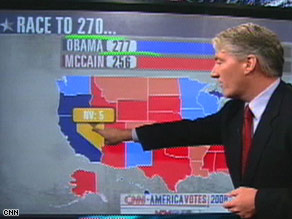 The technology has been compared to Microsoft’s Surface tabletop computing technology, which also uses multi-touch controls. But Han noted that his screens can respond to touch at every pixel and are thus more sensitive. They’re more responsive to fingers than something like Surface, which is dependent on cameras.

Microsoft said it invented its Surface technology independently as early as 2004, though Han was the first to show off a multi-touch screen at the TED conference in 2006. Multi-touch has also become a sensation thanks to Apple’s use of the displays in the iPhone and MacBook Air laptop. You can expect to hear a lot more about Han as the company moves to make its screens more cost effective.