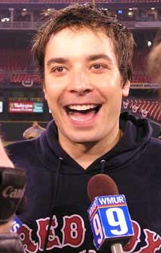 Comedian Jimmy Fallon is taking over NBC’s “Late Night” show next year when current host Conan O’Brien moves up to replace Jay Leno on the “Tonight Show.” Producer Lorne Michaels, apparently unsure if Fallon is ready to make the jump to nightly television, has a novel idea: Work out his kinks on the web first.

Fallon will debut this fall on a site to be determined, with 5- to 10-minute episodes every night, according to the New York Times. Plenty of other television shows have “webisodes,” short clips of original footage from a television series that play on the web, but this is the first time the web will be used as a minor leagues of sort for the big leagues of traditional television.

From the New York Times piece:

Mr. Michaels, the long-time boss of NBC’s “Saturday Night Live,” who also serves as executive producer of “Late Night,” told television reporters here Sunday that he wants Mr. Fallon to work out as many of the rough spots in his presentation as possible in performances on a website.

So if a show is performing poorly, perhaps studios should now have the option to send it down to the minors (the web) to get in some work before coming back up to play with the big boys?

These Jimmy Fallon web shows could last months, as Jay Leno may not step down until June 2009. That’s a lot of practice.