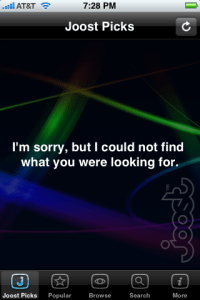 Joost, the once mega-hyped online video startup, has just launched a free application for the iPhone to grant mobile access to its videos. With a nice, clean interface, this app could be a winner — if it can get over the performance issues currently plaguing it.

The app gives you access to more than 46,000 videos ranging from popular movies (like Men in Black) to music videos (I see a lot of Beyonce) to television shows (Late Show with David Letterman seems popular). Unfortunately, I can’t get a single video to load. I’ve tried nearly two dozen across the app, and each one attempts to load before returning the message “Playback Error — The connection to the server was lost. This may be because of poor network quality. Please try again later.”

[Update: Joost had some launch issues but is working to resolve them. Performance still isn’t great, but at least some of the videos are playing now. More at the bottom of the post.]

It’s too bad too because the interface for this app looks fantastic. It kind of looks like the YouTube app interface, but better. You can easily browse Joost Picks, popular videos, browse by type (either film, music or shows) or search video. Each video has a thumbnail, title and description that you click on to play. The player then loads (in horizontal mode) and features the ability to zoom to full screen (like the regular iPhone video player). You can scroll through the pages of videos by flicking the pages left and right.

Joost originally launched as a desktop application for computers. While it got a lot of buzz early on (thanks in part to founders who had built Skype), it eventually lost a lot of its luster due to a lack of real quality content. NBC and Fox-backed Hulu then came along several months later with said quality content and an application that existed in the web browser requiring only Flash and not a separate application download.

Since then, Joost has relaunched as a web app, but still doesn’t have the content that Hulu offers. Sling also recently launched an online video portal, Sling.com, with better content too.

But neither Hulu nor Sling have an iPhone app — yet. If Joost can get this one working, and it becomes popular, expect that to change soon. I’m foaming at the mouth at the thought of a Hulu iPhone app…

Joost is available for free in the App Store. Find it here. 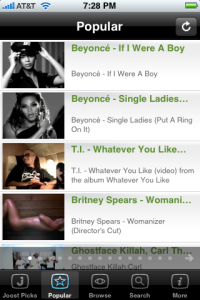 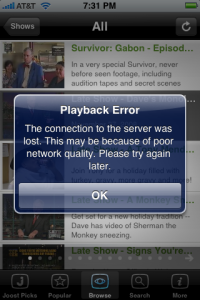 Update: A Joost employee informs me via Twitter that it is aware of the problems currently crippling the service and hopes have them fixed shortly.

Update 2: The app is now loading the videos and playing them (though a bit choppy), but the audio seems to drop off after a few seconds. I’m currently on my WiFi connection running at nearly 10 Mbps, I shudder at the thought of this on 3G or *gulp* EDGE. 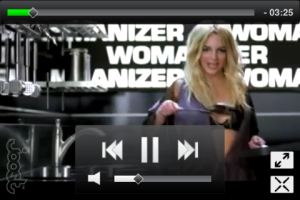 Update 3: Find a video I shot of the app in action below, including some of the load issues.

Update 4: The app seems to have stabilized and is running much better now. I just watched a significant part of The Fifth Element with only a few hiccups. Sadly, it turns of that the app will only work over WiFi and will not stream over 3G or EDGE networks, as The Web Services Report’s Harrison Hoffman notes.