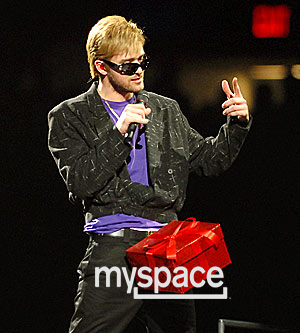 Timberlake will play a major role in developing the strategy and creative direction of Myspace, according to Specific Media. Both parties plan to unveil details of Myspace’s new direction later this summer.

“There’s a need for a place where fans can go to interact with their favorite entertainers, listen to music, watch videos, share and discover cool stuff and just connect. Myspace has the potential to be that place,” Timberlake said in a statement from Specific Media.

Timberlake doesn’t have much experience on the business side of social sites beyond his portrayal of Napster founder Sean Parker in the film The Social Network. But he is a veteran of the music industry and an investor in startups Stipple and Miso.

Online advertising firm Specific Media acquired Myspace from News Corp. for $35 million in a deal announced earlier today. Irvine, California-based Specific Media was founded in 1999 by brothers Tim, Chris and Russell Vanderhook and operates offices all over the world.

The $35 million price tag might seem too high for a site rumored just months ago to be shutting down. Using the news of Myspace’s sale to leverage media attention about the partnership with Timberlake was a smart move on Specific Media’s part.

The Timberlake partnership underscores that Specific Media will focus on Myspace’s music features. VentureBeat has yet to hear back from the company regarding whether music licensing deals made under previous owner News Corp. would carry over. Considering that News Corp. is retaining a small stake in the social site, it’s likely that prior licensing deals will remain in place.